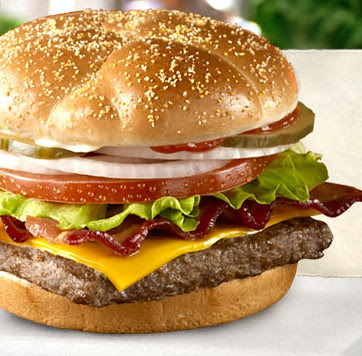 As much as I love the ridiculousness of "hand-leafed lettuce," I have to admit it was the "Applewood smoked bacon" part that sucked us in, even though we should have known better. 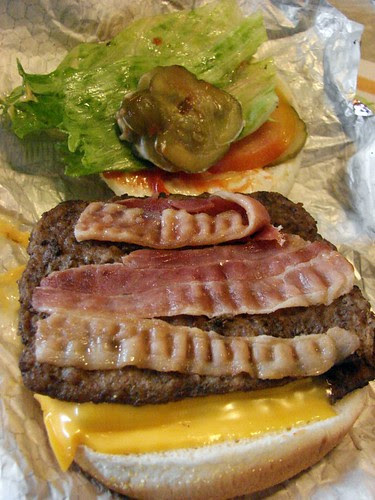 When it comes right down to it, there is nothing about a standard Wendy's burger that distinguishes it from the same type of sandwich at McDonald's. The meat patties are thin, bland, and 100% beef; the orange cheese tastes the same; the buns are squishy whitebread pillows. "Four seriously thick, crispy strips of Applewood smoked bacon" is the selling point of this burger, and it's on this very point that the Bacon Deluxe fails:
At almost five bucks and up for a Bacon Deluxe, there are no bargains here. Burger King's bacon cheeseburgers are not only a better deal, but better tasting because at least they flame-broil their burgers. And if lettuce and tomato are that important to you, Burger King will add them on request.
.

Wow, now that is disappointing. Did they know the "meatmeister" they were dealing with? I would've complained about the lack of a 4th strip and tried to get my money back :)

Not sure where you are but here's a video of a place that looks like it serves up your kind of burger:
http://vimeo.com/channels/cheeseburgershow#7165839 (at 6:27)

That bacon looks like it was boiled. For shame Wendy's!

I'm with Eating the Road, I would'a TOTALLY called them out on the bacon shortage, just to be a dick. Then again, I've -never- had a positive experience @ Wendy's, so I would probably tend to be more vindictive to them than most.

I preferred the old Big Bacon Classic....
I don't think Wendy's even offers it anymore.

I would have called them out on the missing bacon, but unfortunately we'd gone through the drive through - I didn't get the burger open for inspection until I was home at the kitchen table.

I feel your pain my friend, though I can report a different experiance.
I have had wendy's big bacon classic on numerous occassions helps when you have a wendys right across from where you work
and here and there I am put-off by the flaccid bacon they serve.
I decided to give this smoked bacon biz a shot and I can say they bacon they served me was not soggy it was crispy, and thicker than the bacon they used before.
One thing people have been saying is that you have to eat it fresh or it turns soggy, I don't know if this is a valid point but I did eat the burger "fresh"
I cannot atest to the quality of bacon because you can of course get better bacon at a grocery store.
But my experiance was the bacon was crispy and it was thicker than regular fair

Its a strip of bacon for crying out loud! People have become so sensitive to everything. Its a cheeseburger not a 5 star meal.The employees work countless hours serving and preparing your food for you so give them a break. I understand that some of you may have been disappointed but you have to remember that in the end its just a cheeseburger. There is no reason to throw a fit over it and be a "dick" as so well put by J.Astro. Im sure if you where polite and stated your problem to the right person im sure it would'nt go unoticed (that is if you where right). But instead people lose all control and throw a temper tantrum like a 5 year old. Dont people relize that if you act like J. Astro then your going to get negative results. Rule number one "you never mess with the people that make your food peiod!" Eating The Road if you paid any attention to the "picture" then you would notice that it only has "3" strips not "4" like you said you where going to complain about but didnt and try to get your money back. Take a "look" at this very carefully and read what it says next to the "picture" http://www.wendys.com/food/Product.jsp?family=1&product=372. Another point that the customer isnt always right. If they where then everything would be free think about it. I deal with people like this all day long. This is just the tip of the iceberg most people cant even distinguish the diffrence between a Baconator and a Bacon deluxe but feel entitled that they should complain about it because they misorder. I know that this is not the complaint im just soley making a point of the lack of attention people pay when they are ordering food for themselves. This will probally not get posted for fear of making you look foolish but at least it will be read (hopefully) by you Eating the road.