Earlier this year, bits of the internet where I hang around were going crazy over a black burger (complete with black cheese) that Burger King was selling in Japan. The "going crazy" part was how people were clamoring for BK to bring that burger over here, because why whould Japan have all the fun, dammit?

Well, in "celebration" of Halloween, Burger King did bring a bastardized version of the black burger home to the US. If they had just given us a Whopper and a cheeseburger with black buns and black cheese and left it at that, everything probably would have been fine. But no, BK did a half-assed job with this and trust me, it's more trick than treat.

Even considering the usual vast difference between what you see in a promotional photo and what you get when you peel back the wrapper, you can see the huge difference between the original black burger and the Halloween Whopper. Flat-black bun dotted with standard-colored sesame seeds. Regular yellow cheese. And A1 Sauce, which might not be so bad if they weren't so heavy-handed with it (I'll get to that in a minute.)

This is, to be quite frank, nothing more than a standard Whopper with a colored bun and some A1 sauce. And those two features - upon which the King could have built a great specialty burger - are the sandwich's failure points.

Let's start with the bun. All the advertising BK has done touts this special black bun "infused with A1 Sauce flavor." Dammit, Burger King, you should have stuck with the Japanese squid ink coloring and left it at that. But no - you needed infused flavor. Well, thanks a lot for giving us bread that tastes like a fainter version of Beggin' Strips dog treats. Yeah. Play-Doh and smoke, exactly what I want to wrap a Whopper in.

And what is it with Burger King and A1 Sauce, anyway? They "infuse" the bun with it, and then the kitchen crew adds more when they put the burger together. And when I say "more" - holy shit, it's a good thing that the Halloween Whopper is not going to break any sales records because if it did there would be a nationwide shortage of A1 Sauce since they must use half a bottle's worth on every burger.

This is far and away the sloppiest Whopper I have ever tried to eat. There is just so damned much A1 on it that when I unwrapped it, the outside of the sandwich was coated with overflowing sauce. Even after I cut it in half for easier handling, sauce just poured out of it constantly. Pick it up, it drools A1. Take a bite, more A1 squirts out the opposite side. Put it down, A1 slowly oozes like some High-Fructose Corn Syrup lava from between every layer. I felt like I should have been wearing a Tyvek hazmat suit to keep all the spatter off me.

Hey, that must be why it's a Halloween Whopper! It bleeds like an extra in a slasher film!

Thanks to all that cheap slather, there isn't much else you can actually taste in a halloween Whopper except for the sauce. That's either good or bad, I guess, depending upon your feelings about A1.

My personal recommendation is that you skip this slop and satisfy your Burger King craving with a regular Whopper. Or, if you simply must experience the black bun, ask for them to hold the A1.

(I've read that the coloring agents BK used in the American version of the black bun partially survive the trip through the human intestinal tract and will turn your turds green. I hope this is true. It will be this sandwich's only redeeming feature.)
Posted by Dave at 11:38 3 comments:

Email ThisBlogThis!Share to TwitterShare to FacebookShare to Pinterest
Labels: bizarre, burger king, burgers, do not want

Lobster Rolls are Back at McDonalds!

Great news for lobster lovers: For the first time in ten years, McDonald's is bringing back their summertime favorite lobster rolls to restaurants across coastal New England states (sorry, Vermont.)
They're loaded with lobster meat, topped with a big juicy claw, and wicked affordable at just $7.99. 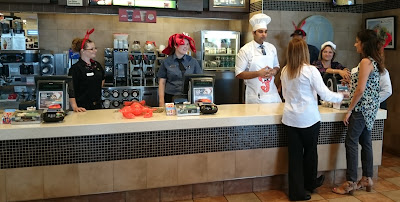 At the First Taste event I attended at my neighborhood McDonald's, the restaurant was decorated in cool and kitschy lobsters and the staff wore lobster claw deely boppers and other deepsea-bug-related headgear. Take note, son: This is a real lobster roll and not some junky fast-food travesty. McDonald's starts with a nicely toasted club roll and beds it down with a blend of shredded and leaf lettuce. Then they take knuckle and flake lobster meat, dress it very lightly with mayonnaise, and top it of with a plump full claw.

Throughout my life, I've had them prepared both ways. When I was a kid growing up in Massachusetts, my mother always made them with mayo. When I got out on my own and started exploring New England with my friends and later with my wife and kid, I learned about the butter variety. Today, I don't have a preference. My daughter Lynnafred grew up eating them both ways...and she does have a kind of preference: "Hot lobster rolls made with butter are for supper. Cold lobster rolls made with mayo are for lunch." Makes total sense to me.

Anyway, even if you're not usually the type to get a cold-with-mayo lobster roll, you should give it a try at McDonald's this summer.  They use the mayo sparingly, just enough to bind the meat, and never so much as to be gooey or obtrusive or to cover the flavor of the seafood. And the little bit of mayo they've got don't add that much to the calorie count, either. One of these lobster rolls comes in at just 290 calories.

Yeah, these are pretty much exactly as I remember them from ten years ago, when we used to get them at the McDonald's right of I95 in Mystic (or the one on US1 in Wells, Maine.) I'm glad they're back. We missed them.

Special thanks to McDonald's of CT and WMass for inviting me to the tasting event.
Posted by Dave at 17:39 2 comments: