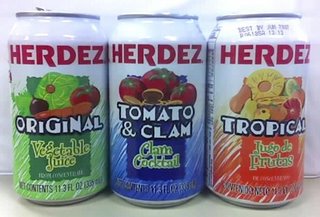 These are now appearing in job lot and discount stores around here. I don't understand why; they're pretty good.

The Tropical Juice variety is an excellent blend of fruit juices without any extraneous water or added sugar, and the flavor is pretty unique. It includes pineapple, orange, papaya, lime, grapefruit, mango, guava, and pear juices.

Original Vegetable Juice is a worthy competitor to Campbell's V8 - lots of mingled vegetable flavors with a pleasant, slightly bitter finish. Bet it would make a hell of a Bloody Mary.

The Clam Cocktail is nothing special, though - pretty much a standard tomato juice with an unidentifiable "something" mixed in. That's not surprising. The big national brand, Clamato, isn't much more than tomato juice, corn syrup, water, and clam powder either. I still think the best clam cocktail is V8 juice mixed 3:1 or 4:1 with the clam broth from a big pot of steamers.
Posted by Dave at 15:11 No comments:

The Cove is a fish market and takeout place which sits on a shady point of land where a dead-end side street branches off of US1 in Stonington, CT. They've been there longer than I can remember. My family and I have been eating there for about 20 years or so. After a day exploring the Connecticut coastline or roasting on a sunny beach, The Cove was a great place to kick back and enjoy some steamers or fish-and-chips with an ice-cold beer from your own cooler. They make a fine chowder, too - Rhode Island style (clear clam broth - delicious) and the service is always friendly.

But I think last weekend was the last time we'll be eating there. The Cove - like so much of southeastern Connecticut - has changed, and I don't like the changes much.

For one thing, the prices have gone through the roof. Shoreline prices in the summer are always higher than we normally pay; these folks only have a few months to make a living from the tourists that flood the area. But when two orders of fish and chips, a bowl of chowder, and a burger come to $38.50, it's gone beyond "tourist price" and into "tourist trap."

The Cove was always a BYOB place, too. But now they're peddling horsepiss Budweiser and diluted horsepiss Bud Lite. In exchange for all the pretty neon signs, advertising banners, and cafe umbrellas that all shout BUD LITE, The Cove forbids patrons to bring in their beverages of choice. When we were there, I saw the sign by the window where orders are placed (Please Only Beverages From The Cove) and brought our cooler back out to the car. Apparently, it is now Cove policy to have an employee walk around the outdoor dining area and harrass people with Non-Cove beverages. One group of diners, in the middle of a meal that probably ran them around $150, picked up their food and their cooler, told the Beverage Nazi that they'd never be back, and ate their meal sitting in and around their car in the parking lot. I was glad I brought our cooler back to the car because I wasn't in the mood to be bitched at and I wasn't in the mood for the argument that would have ensued.

All in all, it's their establishment and they can run it the way they want. Most people don't seem to mind - the line waiting to order on Sunday didn't seem any shorter than ever - and those of us who do mind are free to go elsewhere. But how many customers like the ones the Beverage Nazi chased off can a seasonal business afford to lose? I hope they sell enough Bud Lite to make up the difference.

So long, Cove. Thanks for pissing away a 20-year relationship.
Posted by Dave at 06:38 No comments: 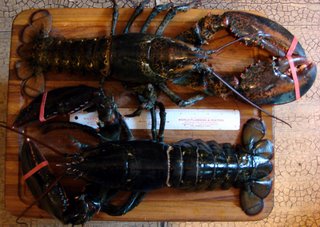 One of the local supermarkets was running a "manager's special" on lobsters today - $5.99 a pound, regardless of size. Good deal. I bought two 4-plus-pounders, which gave my family of 3 all the bugmeat we could handle and enough leftover to make a couple of lobster rolls for lunch.

The white thing between the two lobbies there is a 12-inch ruler to give you an idea of the scale.
Posted by Dave at 22:10 No comments:

Email ThisBlogThis!Share to TwitterShare to FacebookShare to Pinterest
Labels: cooking at home, seafood 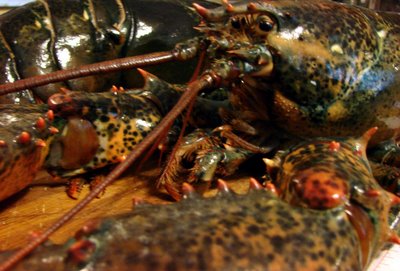 Email ThisBlogThis!Share to TwitterShare to FacebookShare to Pinterest
Labels: cooking at home, seafood 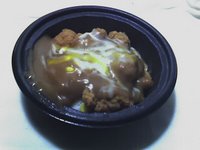 KFC has something new: a Mashed Potato Bowl. It's built in layers: the base is a big portion of mashed potato, followed by a layer of whole kernel corn, then a layer of popcorn chicken, topped with gravy, and sprinkled with what KFC vaguely refers to as their "special three-cheese blend."

I have to admit, it doesn't look very appetizing, sitting there in its disposable plastic bowl. But looks can be deceiving: KFC's Famous Bowls are some fine eating.

KFC's mashed potatoes are usually decent to begin with, and they give you a lot here: two scoops, or nearly as much as in a large side. The corn is standard canned stuff, but not too bad for that - yes, it is obviously canned, but as least it seems to be a better grade of canned. The crispy popcorn chicken is much better than it was a few years ago when The Colonel tried and failed to add it to the lineup; and the gravy is still pretty yummy for a fast-food-chain-fluid. The addition of cheese puzzles me a bit, though. They don't really put enough on top to impart much flavor, so why bother putting it on at all?

As you can see in the picture, the overall presentation is less than elegant, but the flavor combination works very well, and this creation is a worthy cousin to the noble Shepherd's Pie.
Posted by Dave at 22:23 No comments: