This is one of those posts that make me glad my cardiologist doesn't know I have a blog, because in it I detail an awesome breakfast which was totally delicious as well as being pretty low on the heart-healthy scale: Donut French Toast.

Now, you can accompany your donut french toast with anything you like, but I really went for the Trifecta Of Density by siding it with mashed-potato pancakes and thick-sliced bacon. (In my defense, I cooked the pancakes using olive oil and that was the only slice of bacon I've eaten in about two months.)

Anyway, Donut French Toast is wicked simple to make. You'll need some leftover cake donuts - plain is fine, cinnamon/sugar is great, cider donuts are even better. (Don't use raised donuts.) Split the donuts in half, bagel-style, using a sharp knife. Make your usual favorite beaten egg mixture for dipping, but instead of just dipping, allow the donuts to soak a bit, cut side down, in the egg. Flip the donuts over to coat the other side, too, and then fry them, cut-side down, until browned. Carefully flip them over and fry the rounded side. Serve with your favorite sides. You can serve them with syrup if you like, but we didn't find it necessary.

Mashed-potato pancakes are similarly easy to make. Start with some leftover mashed potatoes. Season with a little extra salt and pepper. Crack an egg into them and beat the egg in, then add some baking powder and enough flour to make a rather still batter. Use a spoon or a portioning scoop to put them into a hot skillet - they'll rise as they cook, and when they're browned on one side you can flip them over and brown them on the other.

The combo is delicious, and guaranteed to stick with you all day until supper.

Email ThisBlogThis!Share to TwitterShare to FacebookShare to Pinterest
Labels: breakfast

Earlier this month, Coca-Cola rolled out a new product: Coke Life, a decent product with a kind of stupid name. They're calling it a "reduced calorie" cola. There's no high-fructose corn syrup in it, just real by-God cane sugar and a little touch of stevia extract. That dash of stevia lets Coke maintain the sweetness level of the beverage while allowing them to cut the amount of actual sugar in the drink - and there is absolutely no trace of an aftertaste!

Quite seriously, Coca-Cola Life tastes exactly the way Coke did when I was a kid, back before HFCS wormed it's way into every goddamn food product imaginable. If you go crazy trying to find sugar-based Mexican Coke or if you hoard Kosher-for-Passover Coke when you can find it in the spring, try a bottle of Life and see how well it fits the bill.

By the way, I bought a six-pack of these cute li'l 8-ounce bottles, and GUESS WHAT THEY'RE NOT TWIST-OFF YOU'RE GONNA NEED AN OPENER, SON.
Posted by Dave at 09:24 3 comments:

I'm working on updating the comprehensive guide to canned clam chowder, which was first published in June 2011. There have been a few minor updates over the past couple of years, but since I first posted it, Campbell's has discontinued some of their products and introduced others, and there has been at least one major recipe and/or label change. Look for a heavily revised guide to come out soon.

In the meantime, if there are any canned (or plastic-pouched) New England-style clam chowders you think I should try, let me know about it in the comments here or through the Contact Me form and I'll do my best to find them. Remember that I have to have some way to get them (online ordering or from a store close to the Western Massachusetts / Northern Connecticut area.) Also please remember that I do not accept manufacturer's samples or freebies.

The Mystery of Smarties 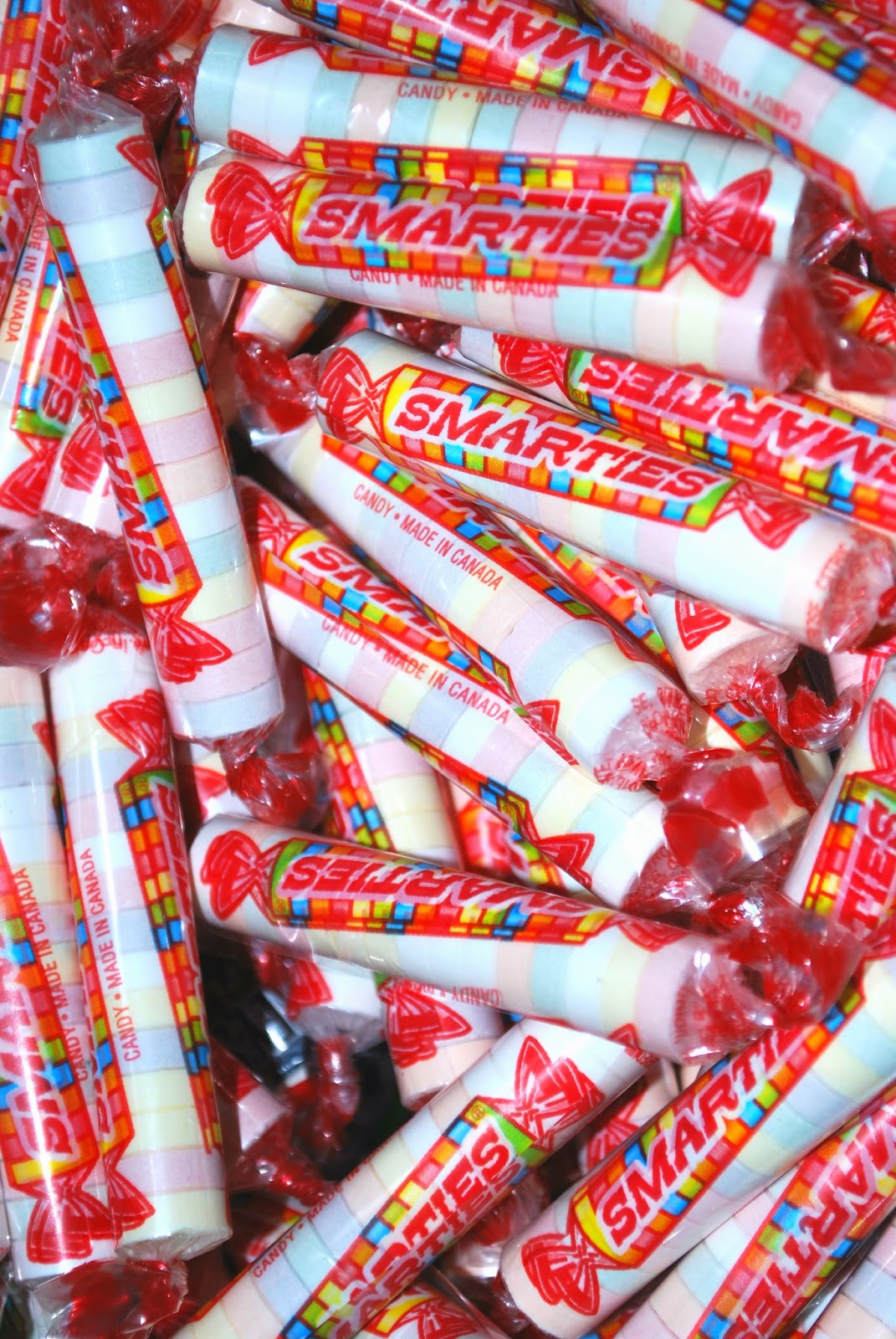 So, Halloween has come and gone, and once again I'm left with a gigantic bowl of leftover candy. There are a lot of kids in my neighborhood and the weather was fairly decent, so I thought there'd be a good trickertreat turnout, but alas, only a dozen or so groups of kids.

Most of the leftover stuff will get piled in the breakroom at work for the ravenous jackals there, but not the Smarties. Everyone in the family poked through the leftovers, and almost universally said, "Oh, good! you didn't give away all the Smarties!"

Smarties are billed by their manufacturer as 'America's Favorite Candy Roll," which could be true I guess, although Tootsie Roll might dispute that. Actually, I hope they do dispute it, Smarties were invented in 1949, making them 65 years old; Tootsie came around in 1896. I say we give them each a sword and let them slash it out at the neighborhood Senior Center.

Anyway, I mentioned "The Mystery of Smarties." Lynnafred was the one who first pointed it out to me. She was sorting a roll of Smarties by color so she could eat the white ones - her favorites - last.  I have to admit, I do the exact same thing (could Smarties preference be genetic??) Mindful of Kellogg's fessing up that all Froot Loops cereal colors were actually the same flavor, I said that the white ones were my faves, too, but I've never been able to really tell them apart other than the fact that the white Smarties seemed to be more citrusy and "brightly" flavored than the others.

And so I made up my mind to really concentrate on the flavor of different colored Smarties, to see if I could discern something more than "the white ones are pretty damn good and I'm not too crazy about the green ones." With little piles of the different colors in front of me, I started to deliberately taste each color.

Nope. Sorry. I got a vaguely citrusy/vanilla taste from the whites and a whiff of pineapple from the yellows, and a warbly, indistinct "fruity" flavor from all the rest except orange. Orange tasted like a fainter version of the St. Joseph Children's Aspirin my mom used to give us when we were kids.

Luckily, the Smarties web site has a FAQ wherein the true flavor intentions of Smarties are revealed! According to Mr. Smartie Pants, the flavors are as follows: