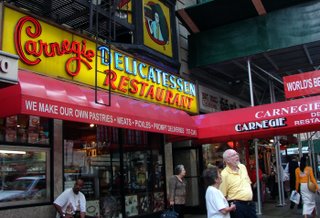 It's the most famous deli in New York City - maybe even the world, right around the corner from Carnegie Hall, and on a recent roadtrip a group of friends and I decided to try them out.

Foods we sampled on this visit:
I have mixed feelings about the Carnegie. The service is excellent, attentive, and friendly; the sandwiches are tasty and HUGE; as you are seated, the host drops off a big bowl of marvelous assorted deli pickles; the dining rooms have atmosphere and yet are clean; the food is tasty. But on the other hand, those huge sandwiches are bare (no kraut, no cheese, no nuthin - it's all extra, except for the bottles of mustard on the table); the prices are astronomical ($20.00 for a reuben?? Puh-leez); and there are no refills on the drinks. A strange combination of tightfistedness and generosity.

I've heard complaints that the Carnegie Deli is little more than a tourist trap nowadays. I don't think it's quite that bad yet, but it would be nice if they offered a little extra without nickle-and-diming the customer to death with additional charges, scaled back on the huge portions, and moderated the prices.
Posted by Dave at 06:45 No comments:

It was a clear and pleasant August day in New England, and we took full advantage of it Sunday, heading down to the Connecticut shoreline to pick up US 1 North and wander along the Connecticut and Rhode Island coast. Around three in the afternoon, we were getting a little hungry and a sign caught our eye: "Seafood Festival Entrance Ahead - Ninegret Park." 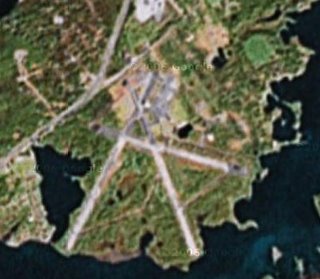 Ninegret Park is in Charlestown, Rhode Island, right off of Route 1. A former Naval Air Station, it is now a well-equipped 227-acre park and 400-acre wildlife refuge. Seen from the air (such as in this satellite picture from Google Maps) the military air base is obvious - the airfield was left in place, though the pavement is showing its age now and much of the runway area is being allowed to crumble. The wildlife refuge has a variety of habitats, and trails crossing through the park offer easy walks and beautiful scenery. 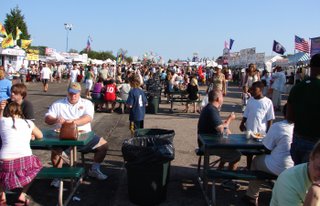 We found ourselves on the main runway of the old Air Station; food booths are set up along the sides of the tarmac, and down the middle are hundreds of picnic tables and trash bags. A large pavillion is set at one end, and various entertainment acts were scheduled (as we walked in there was a band setting up and a comedy juggling team was hamming it up under an EZ-Up tent.) On the other end of the runway, a carnival was in full swing with rides and a midway. The food booths held a surprising variety. Two places offered lobsters (in the rough or as part of a lobster dinner), others were peddling freshly-dug local clams (on the half shell or steamed or fried), crab cakes, various fried seafoods, frozen lemonade, and even tender chunks of lightly breaded and fried alligator tail! One of the busiest booths was offering seafood jambalaya, blackened scallops, blackened shrimp, and "bayou crayfish". Unfortunately, the crawdads were sold out before I could get any.

We started with clams and oysters. A generous portion of steamed clams came with a small plastic container of melted butter but alas, no broth! Although the clams were small, there were many of them and they were plump and sweet, and flavored with parsely, sweet basil, and a slight touch of oregano. The herbs lent a subtle savoriness to the clams that was quite pleasant.

Clams on the half shell were as fresh as they could be - dug that morning, iced, and opened before our very eyes! Sweet and briney, I passed on the cocktail sauce dressing so there would be nothing to mask the flavor. The oysters - another local specialty - were a real bargain at just 50 cents each; they were probably the best oysters I have ever had and no wonder: they had been harvested that very morning as well. 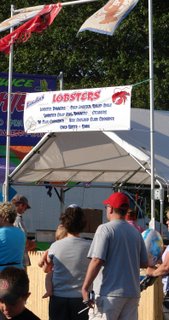 We picked up lobster dinners and a lobster roll at Linda's Lobsters. Each lobster dinner featured a 1-1/2-pound bug, three salt potatoes, and a big ear of corn. The lobsters were delicious, freshly pulled from local waters (not all lobsters come from Maine, after all.) The red potatoes, boiled in the same seawater brine as the bugs, were firm and waxy, just the way we like them. My daughter's lobster roll was just as good as our dinners. Nearly a pound of lobster meat (tail chunks, knuckles, and claw meat) were bound with butter and crammed into a fresh New England-style hotdog bun. There was no filler to be found, not even seasonings like a touch of chopped onion. (My daughter told me it was good, but it "didn't taste quite right. There's something missing." I always put a bit of onion, some fresh black pepper, and a few grinds of nutmeg in our home-made lobster rolls.)

Linda's was also selling steamers, and since the others we had (at a different booth) were so good, I got an order of them here to see how they measured up. Still sweet and plump, but more grit, no herbs in the water, and several of the clams were smashed because they were crowding them during cooking. Overall, they were still good, just not as good as the first bunch. 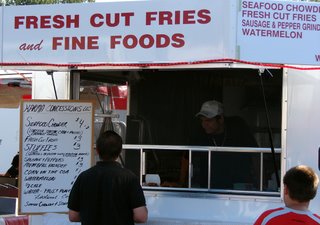 I was surprised to find only one booth selling stuffies - big hardshell quahog clams overfilled with a heaping scoop of stuffing made primarily with cracker crumbs, roughly chopped quahogs, and usually some onion. Karma Concessions LLC had a food service trailer selling french fries, seafood chowder, stuffies, and a few other delicacies. The seafood chowder was very good - clams, shrimp, fish, small bay scallops, and potatoes in a tasty, well-seasoned broth. The stuffies were filled with cracker meal generously studded with big chunks of chopped clams,. thinly sliced cuts of onion, and fine gratings of lemon zest with just the barest hint of horseradish. I prefer my own recipe (which skips the zest and horseradish, and uses butter, pepper, and garlic) but Karma's were probably the best purchased, and if I ever saw these guys set up on a boardwalk, I'd buy another stuffie from them in a heartbeat. 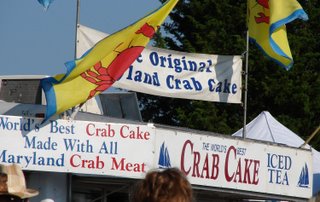 There were two places selling "Maryland Crab Cakes" and both of them claimed to have the "World's Best." But only one of them had newspaper clippings and some award certificates to back up their claims, and that is where my daughter went. To her surprise, she received a crab cake dinner of sorts - the cake was on a bland white hamburger bun with a side of crispy-cooked french fries and a couple of greasy "hushpuppies."

She tossed the bun to the scavenging house finches flitting around the picnic tables and concentrated on the crab cake, which was every bit as good as promised. Pure crabmeat with the barest minimum of fine crumbs to hold it together, it had been fried lacy brown on the outside and was moist, tender, and flavorful on the inside. Her fries were properly "twice-cooked" - first to cook them through, then allowed to cool a bit and plunged back into the hot fryer to acquire a crackling-crisp shell.

The "hush puppies" were pretty strange, though. The best hush puppies are primarily cornmeal, with enough flour to lighten them up a bit, eggs and milk, spicy seasonings to keep them from being too bland, and bacon grease for shortening to improve the flavor. The resulting batter is deep-fried by the spoonful to make tender, meltingly delicious cornmeal fritters that have been a signature Southern side dish for generations. These hush puppies were a pale imitation of the real thing. Thin fritter batter with a couple of bits of corn here and there, poured like funnel cake into the hot oil. They were weird, irregular things and the Fry Guy was apparently cooking them faster than the Fry-o-Lator could stay hot, because the outer shell was greasy and oozed oil unpleasantly. 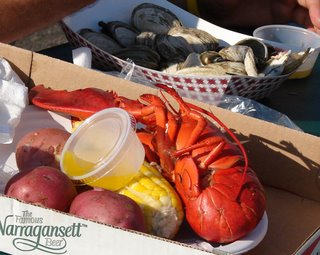 We wandered the festival for a while after eating. None of us felt like riding any of the carnival rides or being cheated on the midway, so we toured the vendors' booths (Gutter protectors! Hand carved gifts from China! Our Three-In-One Mop will leave your floors so clean your mother-in-law will gladly eat off of them!) until sunset, when we got back on Route 1 and headed for home.