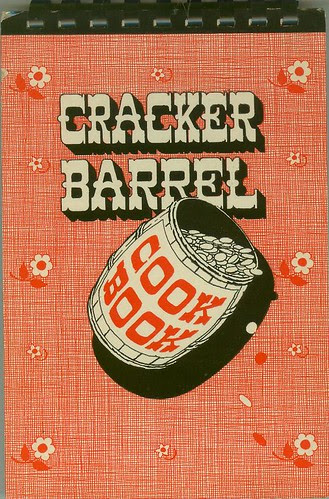 No, not that Cracker Barrel.

This Cracker Barrel Cook Book has nothing to do with the ubiquitous chain restaurant. It was written as a fund raiser by the Ladies' Aid of the First Congregational Church of Newbury, VT in 1957. It's one of my favorite old cookbooks - a fascinating, sometimes quaint, sometimes bizarre collection of 1950's "heavy cooking," traditional New England fare, folk medicine, and household advice.

Here's a fairly typical traditional recipe from the book. To modern eyes this may seem to be a pretty strange recipe, but you should remember that "salt pork" on a New England family farm wasn't like the thick fatty stuff we have in the supermarket today. "A chunk of fat salt pork" would likely be a relatively lean cut taken from an area between the shoulder and the belly, with a generous amount of fat included:

Take a chunk of fat salt pork and slice it ¼ inch thick. Cover with cold water and bring to boil to remove excess salt. Drain the pork and dry it. Then roll it in flour and fry slowly in hot pork drippings in an iron spider, if you have one. After it has been well browned on both sides, which takes about 20 minutes, remove pork to a warm place. Empty part of the drippings, leaving enough to make gravy. Add flour and stir, cooking until paste is brown, then add hot milk and stir smooth. Use ¼ cup pork drippings, ¼ cup flour, and ½ teaspoon salt to 1 pint of milk for a family of four. 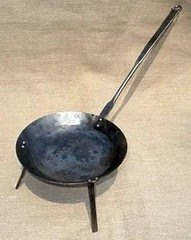 "Spider" is a New England term for a cast-iron frying pan. Once upon a time, when lots of cooking was done over the embers in the kitchen fireplace, cast-iron skillets often were made with long legs that would hold the pan above the embers. I guess they bore enough of a resemblance to a spider that the nickname stuck. You can still buy leggy spiders today for outdoor and campfire cooking. The example on the right is available to order from Curt's Blacksmith Shop in Middlebury, Indiana.

We've had this in our home since, well, 1957. I was surprised to see it staring up at me on my Google images page and had to track it down!