The KFC Double Down Sandwich 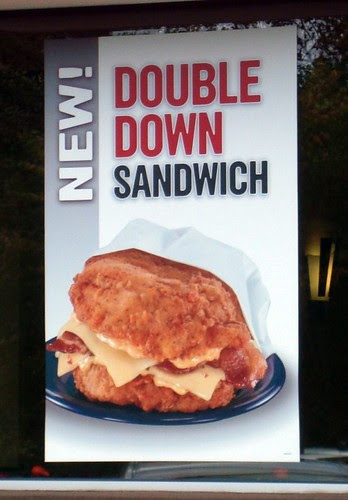 Kentucky Fried Chicken's Double Down Sandwich has been on my Grail List since the day I first read about it. It's completely unlike anything else the Colonel has ever offered: two pieces of bacon, sandwiched between two slices of cheese, dressed with sauce and served between two spicy fried chicken breast filets. Yeah, the fried chicken is the bun. How awesome is that?

KFC is offering this sandwich in two test markets right now: Omaha Nebraska and Providence Rhode Island. Providence is but a short road trip from my pleasant little town in the Connecticut River Valley, so it was an easy decision to take a drive to Rhode Island in search of a Double Down Lunch.

Lynnafred, Michael Loo and I set out in the general direction of Providence staying primarily on scenic US6. As we crossed into Rhode Island, I punched "KFC" into the Garmin and let it guide us to the first one it found in the Providence area - a combo KFC/Taco Bell at a shopping plaza in Greenville (just north of Providence.) We pulled into the parking lot and Lynnafred noticed the sign in the window: "They've got 'em - check it out."

Inside, we found that most of the diners were eating from the Taco Bell side of the menu. I scanned the menu boards, but the only mention of the Double Down was on a stand-up sign by the register. We ignored the taco chompers and ordered our Double Downs. 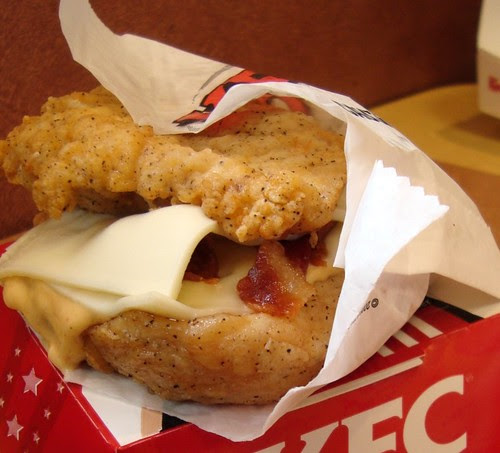 First of all, allow me to give props to KFC, for creating a sandwhich that actually looks in real life like it does on the signs. Chicken, cheese, bacon, sauce, bingo. When we took our sandwiches out of their serving boxes, they weren't substantially different from the photo illustrations. That is pretty much a first since I started writing about fast food.

Okay. So, how about those Double Downs, huh? I can't even begin to tell you how awesome they are. The chicken was perfectly done - juicy and tender, and not a bit overcooked. The coating was spicy - loaded with lots of visible black pepper - but not overwhelmingly so.

The cheese used here was two slices of standard American cheese, not the Pepper Jack and Swiss that are mentioned on some signs. But the bacon was authentic, and the Colonel's Sauce was inoffensive.

At a little under five bucks for the sandwich alone, the Double Down seems a little pricey at first glance. But this is no small snack. There is at least half a pound of chicken here (actually, it felt like a little more than that) and the chicken, bacon, and cheese flavors combine so well that none of us were dissapointed (or hungry when we left.)

I've heard that Double Downs are flying out the door at some of the test locations. I hope that KFC decides to roll these babies out nationally. They're probably the best chicken-and-bacon sandwiches I've ever had, and I'd love to get another one without having to drive all the way out to Rhode Island to get one.
.

I gotta try one of these things....
I've heard about them, but never expected they'd be as good as you say.

I'm way late in commenting on this, but once again you are my hero, Dave. I love that you drove to another town just to try this creation. And frankly, I'm shocked to hear such a positive review. I am now committed to trying one if it ever reaches California.

What a masterpiece! Two chicken fillets sandwiching Swiss and pepperjack cheeses, bacon and the 'Colonel's' sauce. I didn't mention a bun because there is no bun. A Canadian newspaper estimates that it weighs in at 1 228 calories, but KFC has the caloric count at "just under 600". The final nutritional data is not in yet.
It is currently being tested in Omaha, Neb. and Providence, R.I.
It is actually called the KFC Double Down Burger and it looks incredible. I am such a chicken fan and deep-fried fillets (the healthiest cut) are my favorite. I am contemplating driving 5 hours to get one but, I will probably just wait until they are sold in my city (or nearby). To those out there who feel it is a bad idea to bring out such a product when America is so fat, let people eat what they want. I'll drink a glass of milk with mine, if it will shut you up.
And why is everyone complaining that the chicken is the bun? KFC is concerned about our collective health and decided to do away with the bread. Thanks, KFC.
And what about the guy/gal who eats a 3-piece meal? Or has a bucket for dinner with the family and eats 4 pieces, fries, gravy, coleslaw, pop and a piece of cake?