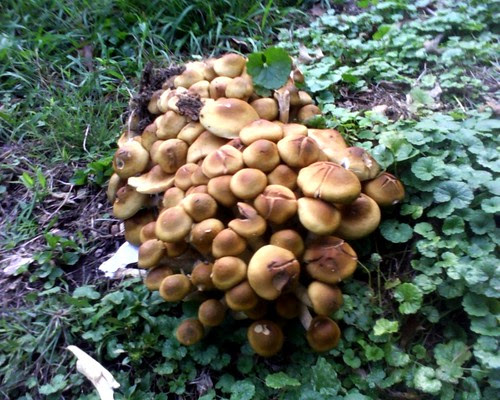 My back yard is not a perfect lawn. It's a "yard," with lots of weedy green things growing close to the ground along with the grass. I have to be careful when I'm mowing, because there are small stumps here and there, left behind from clearing brush and vines and other scrub that emerged when the house was vacant before we moved in.

About a month ago, I wasn't paying enough attention in one spot and hit one of the rottier stumps with the lawn mower. It cracked hell out of the stump and loosened it considerably - not enough to dig up, though - and it bent the mower blade bad enough that I had to replace it. And that whack also seems to have activated something in the soil, because late last week I stepped out into the yard and found a huge cluster of golden-brown mushrooms blossoming from the stump.

I am not a mushroom expert, but my friend Michael has some mycological knowledge, so we went into the yard together to check it out. He picked one, tentatively identified it as a Honey Mushroom - Armillaria mellea - and said it was "probably edible." After we did some Googling, Michael took a little nibble and reported that the mushroom was somewhat bitter and perhaps "not in a good way," and it turned out that both assessments were correct: Honey mushrooms are edible, but should be cooked before eating. And late summer/early fall is the peak season for them.

A day or so later, I picked a couple more, sliced them, and fried them in butter. They were pretty good - rich, like Porcini mushrooms, but with kind of a slippery surface and just a faint hint of bitterness behind them that came out near the finish. I liked them.

Unfortunately, I didn't pick any more that day, intending to get out in the morning and harvest enough for supper. But it was pouring rain, weather that lasted two days, and I never got out to the cluster. By the time I did, they were well past their prime, turning black and dumping spores. I picked a few anyway and set them on other stumps around my yard. Perhaps in the future, when conditions are just right, another bloom will attract my eye and we'll have honey mushrooms for supper after all.
.
Posted by Dave at 05:00

Email ThisBlogThis!Share to TwitterShare to FacebookShare to Pinterest
Labels: mushrooms

Always be careful about picking mushrooms in the city. There are some varieties that concentrate pollutants from the environment in the fruiting bodies.