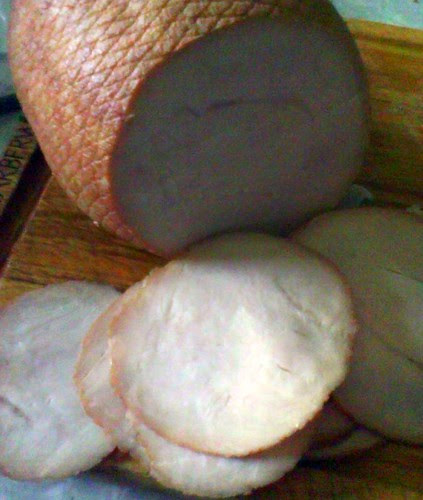 Deutsche Küche Black Forest Brand Smoked Turkey Breast - Quite a deal at just $8.99, this turned out to be a three-pound boneless smoked turkey breast ready to heat and eat, or to slice thinly for sandwiches. Extremely high quality, solid meat with none of the nasty trapped air bubbles we sometimes find in cheap cold cuts, and less added water/broth/whatever than many expensive deli cuts. Lynnafred loves smoked turkey wraps and sandwiches so buying it at this price was a no-brainer. It was easy to cut off perfect, thin slices using a carving knife; I cut about a pound of slices at a time and kept them in a tub in the fridge, ready to use, and the turkey was delicious cut into cubes to toss into salads. A big hit. I'd buy this again in a heartbeat. Product of USA. 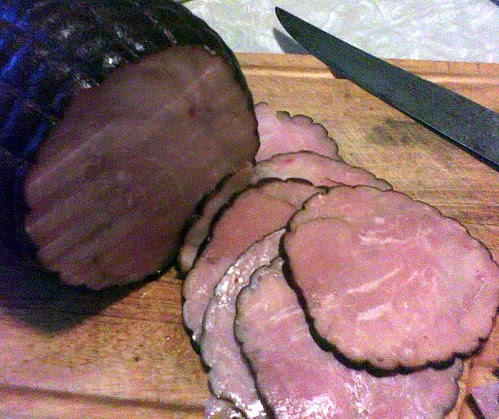 Deutsche Küche Black Forest Brand Smoked Ham - Again, $8.99 for a three-pound smoked ham; same high quality as the turkey, great flavor, perfect to heat and eat or carve cold for sandwiches. Just like with the turkey, I used a sharp carving knife to slice off a pound or so at a time for sandwiches and such. This ham was so much better than the pre-sliced deli meats we've found at supermarkets lately that it was hard to believe that the price worked out to only about three bucks a pound. I'd buy this one again as well. Unfortunately, ALDI carries this and the turkey breast only occasionally as "special purchases," so we just take advantage of the deals when they're available. Product of USA. 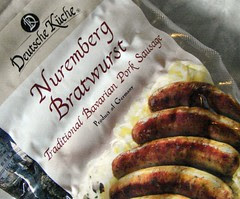 Deutsche Küche Nuremberg Bratwurst are small, breakfast-sausage-sized links of delicious white bratwurst. Highly seasoned with sage and coriander with hints of mace, these sausages were absolutely delicious. Another "special purchase." I was glad that I took a gamble on them and bought four packages; we were able to enjoy them at breakfast several times. Imported from Germany.

Okay, those were the good items (excellent items, actually.) But I promised a mixed review, so now we're going to consider the two less than successful items.

Deutsche Küche Smoked Bratwurst and Deutsche Küche Knockwurst are both American products; they're the same kind of oversized natural-casing cheap weiner product that every supermarket carries in various brands. There is absolutely nothing special about these. To me, they both taste exactly the same - like cheap-ass, byproduct-filled hot dogs - and have little, if anything, to recommend them. I'd love to go to a real German butcher sometime and get actual, real knockwurst and bratwurst, just to experience the real thing, which I'm sure is miles ahead of this tripe. 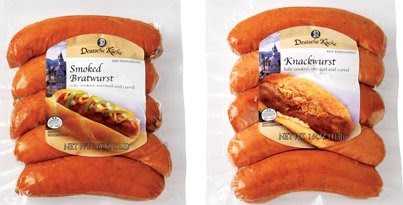 WOW, that turkey and ham buy has got to be one of the greatest deals I've ever seen! How much did you pay for the other items?

Unfortunately true butchers and sausage artisans are getting harder to find...especially a German specific one. I loved to have a "bread guy", a "cheese guy" and a "meat guy" that I made the rounds to each week.

Swing by Rolf's in Albany. Best wurst I have ever had in America.

Nice. I'm guessing you're in New York then...no too far away:
http://www.stoltzfusfarmrestaurant.com/what-we-serve.php

..think all you can eat fresh made sausage!

I am a German actually in Iowa for 10 days. I can assure you that this ham is very good - but it has nothing to do with the real black forest ham. The texture is completely different. I have the impression that this ham was cooked (or mistreated in another way) before smoked (if really smoked and not added only flavor) while the real Black Forest is a raw meat ham, dried in salt and smoked in pine wood smoke. So should you have the chance to get a real one some day, you will be overwhelmed.
But don't worry, steaks and Hamburgers are much better in America !!

Uwe - Thanks for the comment! I knew that ALDI's ham wasn't *real* Black Forest Ham, and someday I hope to try the real thing.

Have to disagree with you on the smoked Bratwurst from D-K @ Aldi. This is coming from a Wisconsin boy. Best smoked brat Ive ever had, but then, most smoked brats taste like kielbasa, these actually taste like bratwurst that are smoked. Havent had the turkey, but the ham is good quality for the purchase: wasnt impressed w/ the Knackwurst too much. Not a rip off, but not super either. Am scared of their Nuremburg brats: dont look like a real sausage too me, too white, too fine ground.... like a Kalbwurst which Im not a fan of.

Hey I'm from Nuremberg, so I thought I should let you know that we eat Nuremberg sausages for Lunch or Dinner either by putting three in a bread roll (best French baguette type) with mustard or ketchup, or we serve them with potato salad. And don't be scared of them, they are delicious and tasty, not at all like Kalbswurst!