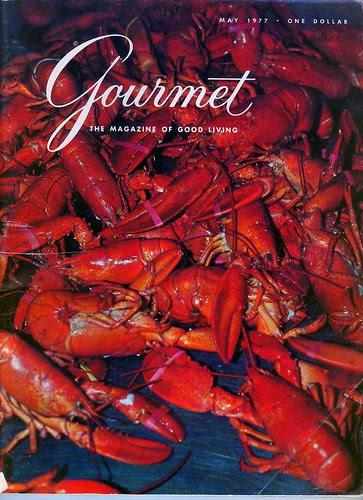 Conde-Nast has announced the closure of Gourmet magazine, a victim of falling advertising revenue in hard economic times as well as print media's struggle to remain relevant in an increasingly digital environment.

When I was a teenager learning how to cook in the early 1970's, my first influences were the Better Homes and Gardens Cookbook (the 1967 edition, still my favorite and most-recommended general-purpose cookbook,) Julia Child, and - believe it or not - Graham Kerr in his "Galloping Gourmet" days on PBS. Ha! I bet you thought I was going to say Gourmet, right? Nope. I didn't discover Gourmet until I was in my twenties, stacking magazines at the town recycling center, when I found a huge bundle of them from the 60's and 70's. I took them home just because I was fascinated by the cover photography and figured there would probably be some good stuff inside.
I was right. Gourmet was a treasure trove - travelogues, menus, recipes, cookware, essays and articles - even the ads fascinated me. It was kitchen and escapism all rolled into one, and it was written in such an easy approachable style that I sometimes wondered what was so damn special about "gourmet" cooking anyway?

Even though I thought the magazine had kind of slipped a little in recent years, I'm going to miss it. The recipes will remain accessible, online at epicurious.com, but it would be really great if Conde-Nast would digitize back issues by the decade and market the files.

They apparently also publish Bon Appetit, which had a higher circulation and ad revenue. It's also not as good, imo.

I love that your first encounter was at the recycling center!!