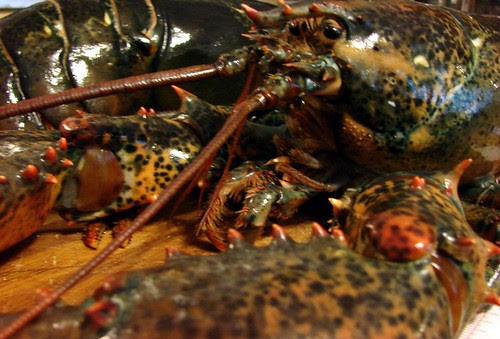 Back in June, I wrote about the lingering depression in the lobster market, with live-and-kicking bugs selling in southern Maine hanging at $4.99 a pound, the lowest price in years. Well, we were back in the south-of-Portland area again on Saturday the 17th, and I couldn't believe how much lower prices have gone since then.

For some reason, though, restaurant prices in the area aren't reflecting this reality. At Fisherman's Catch in Wells, for example, a twin lobster dinner was being advertised at the "market price" of $21.99. Sorry, but when I can stop at any lobster pound and buy 1½-pounders for $3.99 a pound, there's something not quite right with that story. (End of season or no, I suspect that the reason more people weren't ordering lobster on Saturday had something to do with the price.)

Earlier this month, fishermen were selling lobsters on craigslist at $3.50 a pound - driven there because that direct-to-diner price was still a dollar more a pound than brokers were willing to offer them. It's a great time to buy lobster.
.
Posted by Dave at 18:12

Yeah, I hate when companies/restaurants don't respect the intellagence of their customers.

It's a combination of "price creep":
http://www.investopedia.com/terms/p/price_creep.asp

...the only way to affect it is to "vote with your wallet" and stop patronizing those places that refuse to charge the real market value.