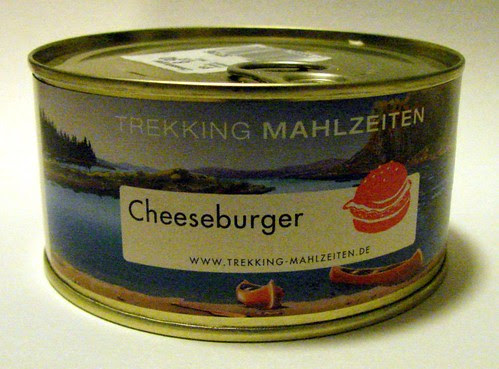 I first read about the Trek'n Eat Cheeseburger in a Can in 2004, and was instantly fascinated. Unfortunately, it's not sold in the United States, and the German company that produces them does not ship outside Europe.

Recently, however, my sister-in-law visited friends in Switzerland and came home with a special treat for me: a canned cheeseburger!!

Americans love their cheeseburgers. It is no wonder that this canned version - impossible for the ordinary burger aficionado to obtain - has achieved some sort of mythic status among American bloggers. Besides, if it were possible to equip your Zombie Apocalypse Shelter with non-perishable burgers, wouldn't you prefer them to MREs, sardines, and powdered milk? You bet you would. Let me tell you, though: the fact that Trek'n Eat doesn't distribute these things in the US is a gift to America. Canned cheeseburgers are foul. Think of the worst "convenience meal" you've ever had - even the Banquet Cheesy Smothered Meat Patty Meal - and the canned cheeseburger completely surpasses it for nastiness. 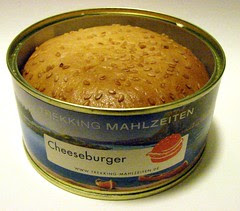 Opening the can revealed that the top bun, studded with sesame seeds, completely filled the diameter of the can. We gave it a sniff, but there wan't much aroma. Lynnafred poked at the bun a bit and found it to be surprisingly fresh and rather spongy, and not kind of dried and "day-oldish" as we thought it might have been.

Once out of the can, though, the burger was much more like you would have expected a canned cheeseburger to be: small, kind of flat, almost sullen-looking (if a burger could be said to look sullen.) The meat and cheese and whatever else might have been between the buns were invisible, because the bun was large enough to have encased the entire structure all around. We found that intriguing, and I tried to peel back the buns to reveal some of the burgery secrets that might have been contained within. Alas, the bread and cheese had more or less fused together during processing and it was difficult to lift the top bun without having it delaminate into crumbs. I settled for cross-sectioning it with a kitchen knife instead. 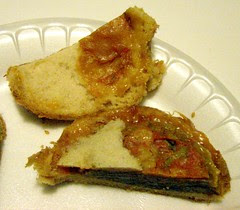 I cut the burger first in half to examine the components, then into smaller wedges so that my wife Maryanne, daughtger Lynnafred, and friend Michael could all have a piece. I could not have had a less appetizing-looking item in my hand if I were gripping a cat turd.

The meat patties - yes, there were two of them, stacked atop one another though sligltly offset - were greyish brown, coarse and gritty, with visible bits of...something...studded in there. The cheese had kind of seeped into the pores of the bun like a strange sort of dairy-based plastic sealant. I took a bite, and chewed...

...and spit it out. The meat was disgusting - it was like slices of horribly malseasoned, overcooked, adulterated sausage, at once pasty and grainy and rubbery. It tasted nothing like any type of beef (or even beef substitute) I'd ever had. It is beyond belief that whoever developed this horrid simulacrum of a burger has ever tasted a real cheeseburger. I can't imagine that they've even seen a real cheeseburger, though the possibility that they might have glimpsed a grainy, low-resolution thumbnail of one, from a distance, is plausible.

I took another bite, determined to get at least one taste down the ol' hatch. When all was said and done, the four of us had reluctantly managed to eat a little less than half of the cheeseburger between us. It must be said, though, that Zim thoroughly enjoyed the leftovers.

So. I have eaten a canned cheeseburger. An experience which no one will ever be able to take from me - as well as one I wish never to repeat again. I owe my sister-in-law bigtime favors for this one. 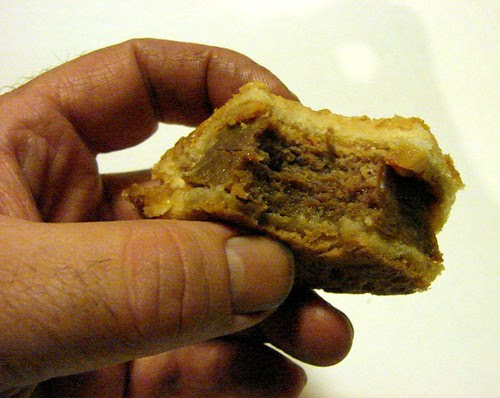 How about a closeup? I promise it was even worse in person.
Link:

Trek'n Eat Cheeseburger in a can website - The actual product website (English Language.) Be grateful there is no ordering link for the United States.

One last pair of pictures:

On the left, the product depicted in Trek'n Eat's catalog photo. On the right, what the actual burger looked like when it came out of the can. Not even calling that a "serving suggestion" forgives that level of bullshit. 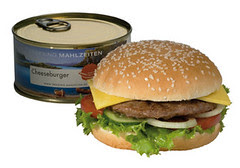 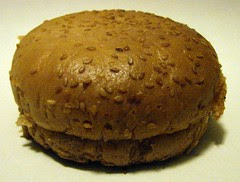 ...the ad vs. reality is shocking, and I haven't even seen the real thing. The outside rind (?) of the damn burger-imposter thing in your hand looks... I dunno... -jellied?- Sick. It's like an alien-pod version of what extraterrestrials think humans eat in, like, INVASION OF THE BODY SNATCHERS, or something.

Poor Zim- amazing that he did not have a reaction like he did to the Alpo!

I was laughing out loud in the office reading this....thanks for the excellent review of this disgusting invention!