Vintage Sunday: Strange Products from the Past

Today we're going to take a look back at a few food products from the pre-internet era which were too unusual to survive in the competitive environment of the American supermarket. 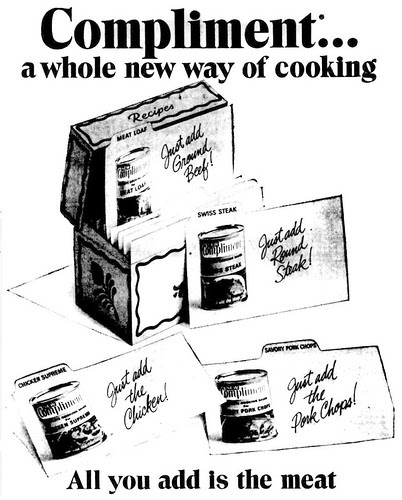 Compliment Complete Cooking Sauces - Introduced by PET in 1969, Compliment was billed as kind of a "gourmet dinner in a can." It was available in five varieties (Compliment for Meat Loaf, Compliment for Swiss Steak - Tomato Style or Brown Style - Compliment for Pork Chops, and Compliment for Chicken Supreme.) Most of these were pretty straightforward sauces: brown the meat of your choice, add a can of Compliment, and simmer until done for a delicious supper. The Meat Loaf variety, though, was truly odd:

"Just open a can of Compliment for Meat Loaf and add the ground beef. Shape it. Bake it. That's it! No eggs. No bread crumbs. No fixing. Everything is ready...already in the can."

Cream of Mushroom soup was the long-standing king of "add-a-can cuisine" and PET was obviously hoping to use that as a springboard for Compliment. But cream of mushroom soup was well-entrenched in American kitchens and incredibly cheap as well. Compliment was never able to make much of a dent in the market and was soon discontinued. Meanwhile, forty years later, cream of mushroom soup is still the king of "add-a-can cuisine." 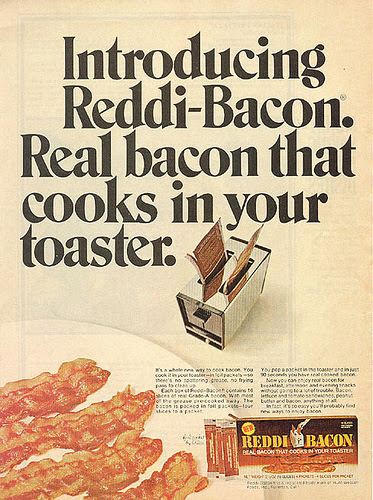 Reddi-Bacon was brought to market in 1964, by the makers of Reddi-Wip aerosol whipped cream. Pre-cooked bacon was packaged with absorbent paper between sheets of aluminum foil. These packets were designed to be inserted into a standard toaster and heated to serving temperature. Thanks to the Internet Bacon Meme, Reddi-Bacon has attracted a lot of attention lately, most of it negative in the "What the hell were they thinking?" way. There are plenty of bloggers out there telling stories about blazing toaster fires caused by rivers of bacon fat flowing from leaky foil packages. The stories are entertaining, but they're also mostly bullshit.

Reddi-Bacon was precooked and there was very little extra fat involved when the foil packets were heated. However, there was occasional slight leaking from torn or damaged foil packages, and that undoubtably caused some smoking and ruined toasters. The problems with the packaging was vexing enough to the company that Reddi-Bacon never really made it out of test markets before the product was pulled from the market.

Those who mock Reddi-Bacon should remember, however, that this really wasn't a failed product in the long run. In 1964, microwave ovens were not common household appliances, and American kitchens just didn't have the kind of technology that would enable the pure awesomeness of SIZZLING BACON ON DEMAND. Today with microwaves in nearly everyone's kitchen, fully-cooked bacon - ready to heat and eat - is available everywhere and relatively safe to heat up in the ol' nuker.

You can view a PDF of the patent for Reddi-Bacon's packaging here.

And you can read about the introduction of Reddi-Bacon in the American marketplace in the 22 November 1964 Hartford [CT] Courant. 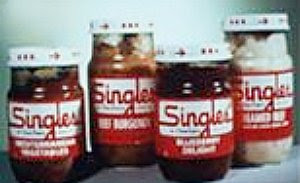 Gerber Singles - Gerber had the best of intentions with their line of Singles, introduced in 1974: Heat-and-eat foods packaged for people with limited time, culinary skills, or kitchen access. By most accounts, the offerings were fairly tasty (for canned foods) and might have been accepted more readily had Gerber not decided to hold down costs by using their existing stock of baby food jars as packaging. Apparently, no one likes to think of themselves as so pathetic that they have to eat their meals out of baby food jars. Alone.

Like Reddi-Bacon, though, Gerber Singles weren't really a bad idea, just too far ahead of their time. After all, Abbott Labs sells millions of cans of Ensure every year, and that's little more than baby formula for adults.

:) Those are awesome! That Redi-Bacon would get a sort cult following if it were rereleased today...although not sure of the fire hazards involved with grease and such dripping from a toaster.

I love baby food and would totally be in to those Gerber meals...I wish they still had them.

Oops, sorry! I posted this on the Wendy's nugget article by accident! Repeating here: Ohmigosh! My sister is STILL looking for a replacement for Compliment Swiss Steak Sauce (brown style), lol! I never really got it, but she LOVED that stuff! I've searched online to even try to find a list of ingredients to experiment with (I'm the cook in the family, she just opens cans, lol), but have never found ANY info online. Where did you get this? And can you print the ingredients list if you have it? My sister will love you for it, lol.

I wish I could be more help, Anonymous, but I'm afraid that there is very little information about Compliment out there. I sort of vaguely remembered it from when I was a kid, and then found a reference to it very recently when thumbing through an old cookbook. When I looked online, the only thing I could find were some newspaper advertisements in the Google News Archive (my illustration for that part of the post is a scan of one of those ads.)

You might have some luck by writing to the J. M. Smucker Co., which owns PET these days. I'm nost sure whether or not they'd be able to help. PET has been bought and sold by several corporations over the past forty years, and information about discontinued products often gets lost or discarded as companies change hands. Here's the contact info for them:

People collect vintage can labels. You might try to find someone who deals in those. Setting up an eBay alert might also help.

Complement for pork is unreplacable. My mom and I tried mushroom soup and it came no where near Complement. My mo . Would brown center-cut pork chops and add a can of sliced new potatoes with the Complement sauce and it was so delicious. It might be over 40 years since we had it but it is so unforgettable.

I agree. Complement for Pork can't be beat. I wish I had a can label so I could try and duplicate it.