The Sad Condition of Pastrami These Days

Remember back a few years ago, when you'd get pastrami at the deli and it would look like this? Nicely marbled, some strips of fat along the sides, and every thin slice edged with a wonderful crust of cracked black pepper and coriander seed.

And then sometime between then and now, "fat" became a dirty word because lots of people who were unable or unwilling to exert any self-control at the dinner table looked at the large-enough-to-feed-three-people sandwich they were holding and said, "OMG THIS MEAT IS FATTY AND THAT IS WHY I, TOO, AM FATTY," and demanded "leaner" pastrami.

Processing companies began making more pastrami from much leaner cuts of beef, like the round, instead of from the fattier underbelly cuts like the plate or flank. They kept the cure and spice blend the same, so it still tasted like pastrami, but the fat was gone and not only was the finished product dryer, it always tasted like something was missing. Real pastrami was still available, though, but over time it started to get harder to find. Within a few years, I found that if I simply asked the deli for "pastrami" I would be handed a package of that crappy "pastrami round." I had to specifically ask for "plate pastrami," or in some places with less-experienced staff, "the flat kind." 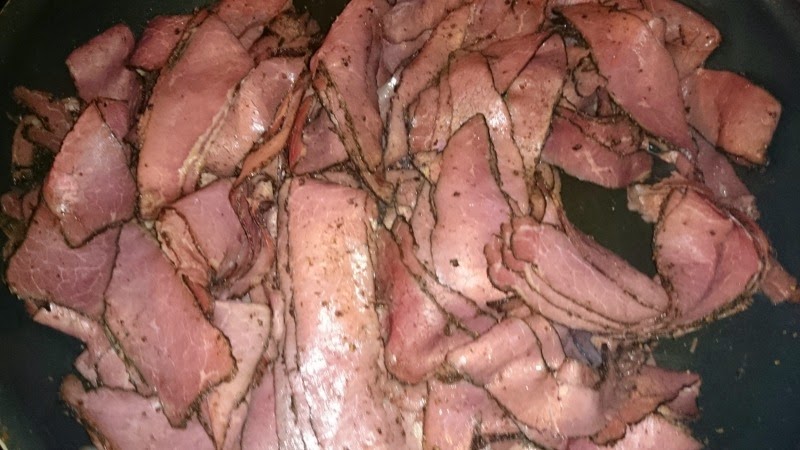 Apparently, though, having lean pastrami round isn't enough. It looks like the fat has been removed from flat pastrami. That stuff to the right is the pastrami I picked up the other day. I don't know what part of the cow it came from, but it sure wasn't the plate or the flank.Maybe they're using a brisket with most (ha, ALL) of the fat trimmed off. And of course such a lean piece of meat isn't going to have a lot of juiciness, so it's injected with a load of saltwater to add moisture. (It adds weight, and therefore cost to you, also - it means you're paying meat prices for water.)

I can't believe I actually paid $10.99 a pound for this stuff. Next time I'm going back to making my own.

Email ThisBlogThis!Share to TwitterShare to FacebookShare to Pinterest
Labels: meat

I could not agree more - I do not think the last deli pastrami we brought home had ANY fat in it.

I'm with you about making it at home. In fact, I make YOURs at home:

I couldn't agree more. Lean pastrami is perhaps an oxymoron and definitely an abomination.

I know exactly what you mean, Dave. That "lean" pastrami makes a terrible pastrami on rye. There's a brand I've had luck with called Kayem "New York Brand" Black Pastrami. Sometimes the person behind the counter looks at you funny when you ask for the "Black Pastrami", but it's marbled and just like NY; or so I have found.