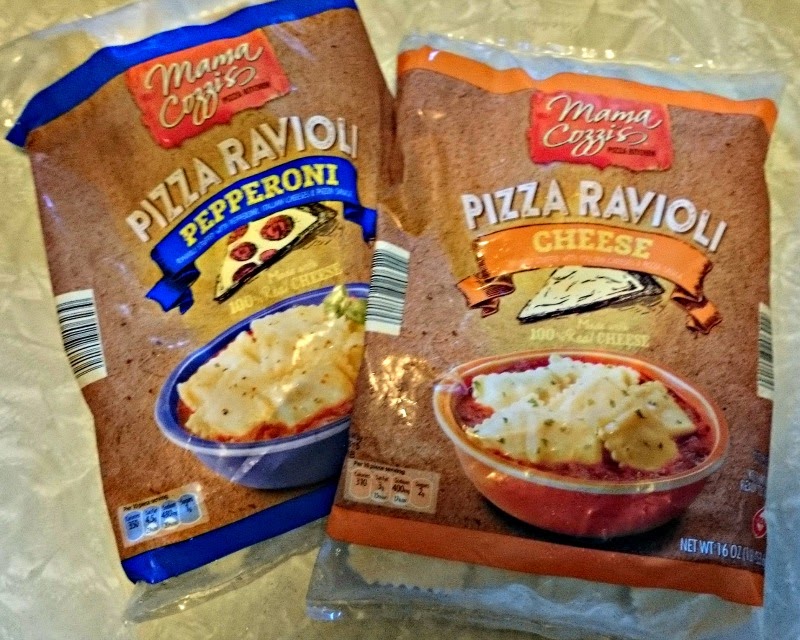 The frozen-food cases at ALDI hold such delights - which rotate in availability with a baffling inscrutability - that I could probably write this blog exclusively about ALDI products and never run out of source material. Why, just the other day I went in for some bread and a head of lettuce - and nothing else - but the siren song of the frozen foods beckoned me and there I beheld PIZZA RAVIOLI.

There were two varieties available: Pepperoni and Cheese. I bought a bag of each and boiled them up according to standard ravioli operating procedures, and then served them without attempting to distinguish by sight which ones were which.

The Pizza Ravioli are as deliciously satisfying as frozen ravioli can be. That is not intended to be insulting or ironic, either: The ravioli I grew up eating was always frozen - I don't think I saw a "fresh" ravioli until I was like thirty years old - but it means that you're not going to find huge bursting-at-the-seams-with-ricotta ravioli in these bags. The filling is standard quantity, and standard-for-ALDI quality (which means, of course, that it's right on par with any name brand you might usually buy.)

I cooked and served the two varieties by dumping both bags at once into the boiling water, then fishing them out and intermingling them in a big shallow serving bowl. I wanted an adventure, because it's impossible to tell by eye whether the ravioli on the end of your fork is pepperoni or cheese. It's not until the mildly spicy taste of the pepperoni hits your tongue that the difference is clear. ALDI certainly got the taste down pat here. These ravs genuinely taste like pizza, enough so that even Lynnafred's boyfriend ate them, despite his declared distate for ricotta cheese (he usually only eats meat ravs, the heathen.) They were really delicious, and a nice change from standard ravioli. I would buy them again.

Remember if you can't find these in your local ALDI, have a chat with the store manager to see when the store is going to get some in. Like many of ALDI's products, Pizza Raviolis are generally a "limited time" item, and every store's schedule differs.
Posted by Dave at 05:00