As you may remember from this post, Jess Watsky (Foodette) suddenly appeared last week bearing the two most important ingredients for making bacon:


Curing the bacon took about four days, from Sunday afternoon until Thursday night when I removed it from the cryovac pouch in which it slept, gave the belly a rinse under cool running water and picked off any remaining spice bits. I set it on a few paper towels and patted it dry, and later I set it aside in the cool pantry  covered with a loose-knit cotton dishtowel. The idea was to age the belly, allowing more of the moisture to evaporate out of it before sending it to the smoker. 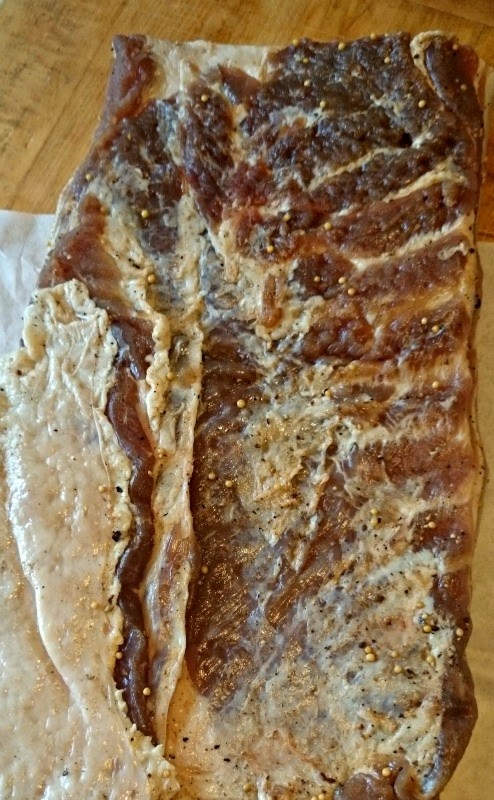 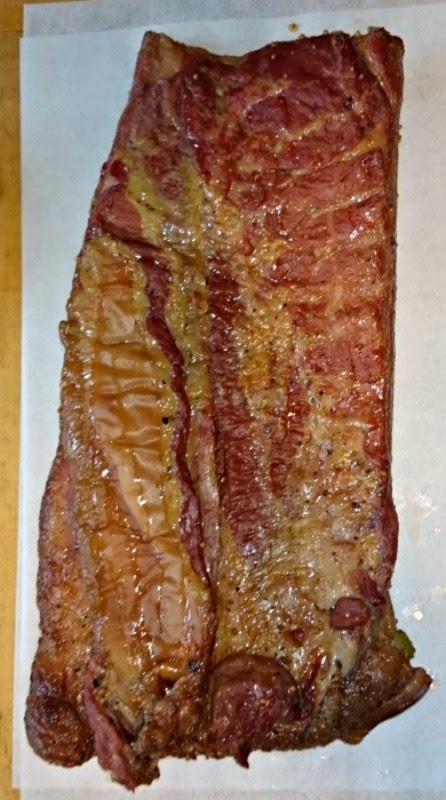 By the time Jess arrived on Saturday, the bacon was ready to go. The fat was dryer and waxy, and the lean had firmed and darkened in color.

For comparison's sake, I trimmed a few thin slices off of one end and fried them up crispy in a small skillet. Simple, unsmoked (or "green") bacon. The flavor was delicious: bacony to be sure, but with just a hint of the juniper berries and a slight sharp edge from the mustard seed. Jess' choices for seasoning were great. So I added a couple of meat hooks to the thick end, and we hung it in the smoker for a little quality time with some smouldering apple wood.

I set the fire in the smoker to low and started the chips. To prevent a big heat build-up around the meat, I set an heavy aluminum baker's tray above the burner. We kept the temperature very low (less than 200F) and left the side to hang and smoke for 3 hours. 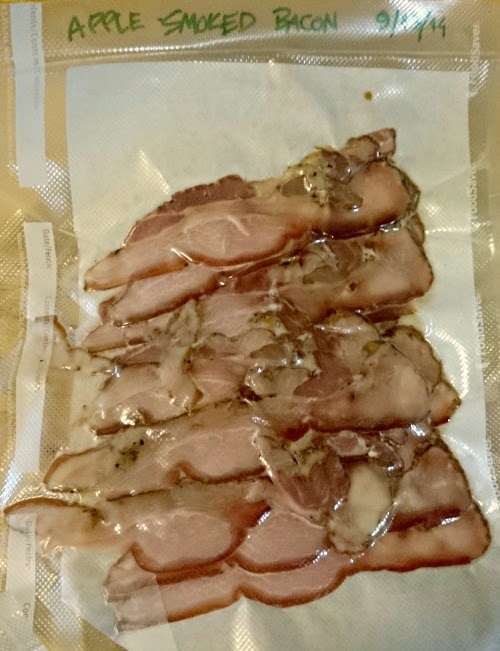 After chilling the side for about half an hour in the freezer to firm it up a bit, I brought out my slicer and we cut it 18 slices to the pound. Because the side was on the small side, this was just right for moderately-thick slices. We made up 1-pound packages.

Jess was really happy with the end results. She's still got another side from that Berkshire pig. We're thinking maybe making some pancetta next.

Bacon is what got me started reading your blog in the first place. You've been away, and I haven't fired up the smoker for slabs in a while. Guess I'll give it another go, like soon. ;-)