My friend Fred visited family in Puerto Rico, and brought me back a package of breadfruit seeds. He told me that they're called pepitas in Puerto Rico.

They're similar to chestnuts; they have a thin hard shell on the ou 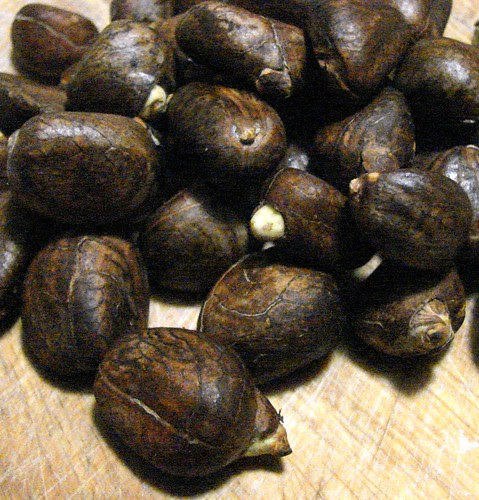 tside, and inside a somewhat sweet, creamy-when-cooked inner nutmeat covered with a brown membrane. Preparing them is fairly easy. Bring a pot of water to a full boil, and dump in the pepitas. Boil them rapidly for at least 30 minutes - until they can be pierced easily with a fork - and then allow to cool until they can be handled. Then, the outer shell and the inner membrane are peeled away, and the seeds are eaten.

We had them with dinner the other night, and I must say these little morsels sure are labor intensive. The outer shell shucks easily but the inner membranes were tougher to remove. But they were pretty good, mild and nutty and just slightly sweet. They were even better after I briefly sauteed them in a bit of foamy melted butter in a skillet - that really brought out the nutty flavors and made them much more delicious. 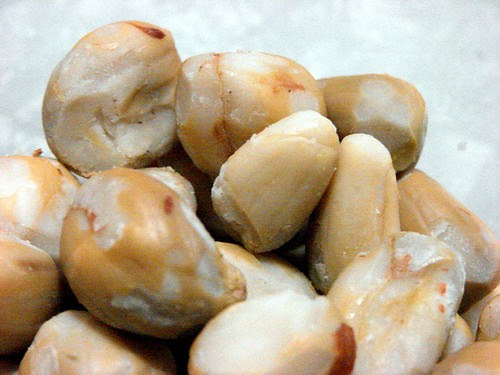 There's one other thing I should mention about breadfruit seeds: they're championship-grade whistleberries. Eating them, even just a couple of them, makes you fart. A lot. Loudly and hilariously. I wish I'd had a handful of them when I was 12 because I would have been The Comedy God of Junior High. (Fred told me that the seeds are nicknaed rompe matrimonios - "marriage breakers" - in Puerto Rico.)

Email ThisBlogThis!Share to TwitterShare to FacebookShare to Pinterest
Labels: cooking at home, vegetables

"I would have been The Comedy God of Junior High. (Fred told me that the seeds are nicknaed rompe matrimonios - "marriage breakers" - in Puerto Rico.)" - That is hysterical!!!

I wonder if theses could be used in replacement of corn to make cornmeal (cornbread), hominy, grits, etc., I think it might be tasty. Do you have more to experiment with?

Alas, ETR, I only had the single package and I've never seen them in any of the Hispanic markets in my area.

If I had more, I'd make a "chestnut" stuffing for Thanksgiving with them just for the lulz of giving my entire family a bad case of barking spiders.

Sorry, Brett, by my friend brought those back after a visit to his family; it's not a trip he makes often or even regularly and I really don't know when or if he'd be able to get more of them. Maybe you can check for an online grocery where you can order them?

I live in the caribbean (Grenada to be exact) and we call those 'Breadnut' seeds. We don't use the fleshy part (quite messy to handle once the fruit is really ripe), only the seeds.

The breadfruit is slightly different. The two 'fruits' are similar looking on the outside but the breadfruit seed are as small as mustard seed and there's a cone shaped core that's usually taken out along with the seeds and discarded before actually cooking the fleshy part.

And, they both taste different.