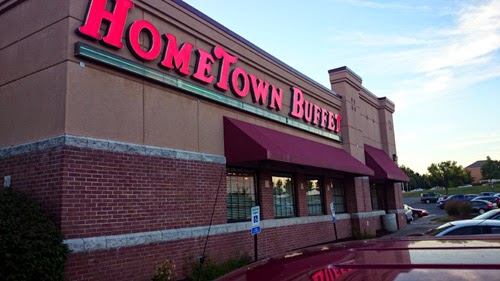 My wife and I were driving through Manchester, Connecticut last Friday, kinda-sorta looking for a place to have supper, when we happened to notice a Hometown Buffet. When Lynnafred was a tyke, there was a Hometown Buffet in Enfield and Friday nights were Hometown Buffet nights. The food was not horrendous, little Lynnafred could always find something she liked on the steam tables, and - best of all - it was cheap to feed a kid there (they used to charge $1 per year of an under-8-year-old kid's age. Hell of good deal.)

Even though Manchester has a myriad of dining options, we decided to eat at Hometown Buffet for the worst of all possible reasons: nostalgia. We had no idea that we would soon be having a supper that was just one small step better than eating vienna sausages right from the can, with our fingers, while standing over the kitchen sink in the dark, crying.

There's no way for me to gently segue into a description of the food here so I'll just get right to it. The front and center table has always featured the Hometown Buffet staples: Meat loaf, oven-roasted chicken, mashed potatoes, gravy, mac and cheese, baked potatoes, yeast rolls, and cornbread. Mass-market mac and cheese is far too salty for my present tastes, which is just as well because the edges were drying out and slightly darkened as though it had been made a while ago and finally made it to the table. I took a chicken wing and a small scoop of potatoes which was an immediate cause for regret. The spuds had developed a skin and a long sheet of it lifted along with scoop. No gravy for me, either, since I couldn't decide whether to take some of the thick grey part or watery brown part. The meat loaf must have been pretty good though, because there were nothing but crumbs in the pan, and as soon as more would come out it was immediately scarfed up by hungry (and probably undiscriminating) hoards. In all fairness, the rolls and cornbread were decent.

A side table had other mains - baked salmon which had a strong chemical aftertaste, some kind of whitefish (might have been haddock but it was so thoroughly cooked that I couldn't even tell if it was organic matter, let alone what species,) fried fish of similarly indeterminate origin thickly coated with a greasy batter crust. 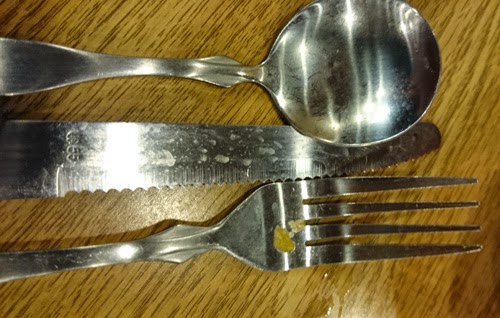 I was just sitting down to start eating when Maryanne said, "Don't eat with that fork." It took me a couple tries, but I finally found a fork and knife that I could wipe clean enough to eat with. This hygienic lack was not confined to utensils. At the beverage station, there were various spills here and there on the counters, and straw wrappers and napkins littered the floor. 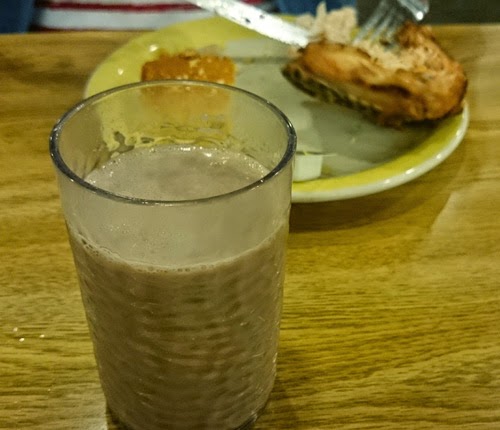 Finding something to drink was even harder than finding a clean fork. I poured a sip's worth of iced tea so I could see if it was sweetened or not. I never found out, since the tea smelled as if it were brewed from used toilet paper. "Filtered water" must have been filtered though a jug of bleach. Perhaps, though, this is a characteristic of the water in Manchester because all the water-based beverages available had that bleachy chlorine flavor hanging over every sip. Luckily, there was chocolate milk. (In the background is a view of Maryanne's plate as she attempts more or less successfully to rip her cut-resistant chicken into bite-sized pieces with a dull knife.) 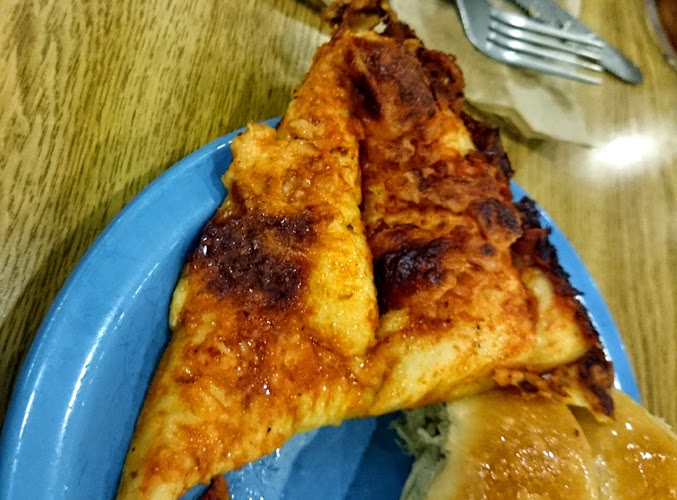 I was lucky enough to score a piece of Darkly Cooked Bread Triangle. I say "lucky" because many of the children there, mistaking it for pizza, were eating it as fast as it could be brought from the kitchen.

Desserts were no better. Bizarrely, the soft-serve machine left a dangling turd of ice cream from the nozzle no matter how hard customers tried to claim every bit of the treat as it extruded from the machine. Slices of cake were dry and crusty. A pan of apple cobbler looked like it had been served by beating it with a golf club. Maryanne and I tried some kind of
cheesecake that might have been an Elmer's Glue Chiffon.


Many of the staff were completely unprofessional, loudly chatting with each other about the drinking they planned to to after work as they were setting out food at the steam tables, customers milling around them. They made no attempt to censor any of their profanity-laced language, even around the kids. (A notable exception to this was the young woman clearing plates from our table, who was pleasant, friendly, and patient even to the most difficult patron despite being responsible for busing tables across half of the dining floor. We gave her a great tip. She deserved every penny.)

Maryanne and I were actually laughing as we left the restaurant. Not because of the awesomeness of the experience, of course, but because we were astounded that an eatery widely known for it's mediocrity could stay open at such a low quality level. I guess my grandfather was right: there really is an ass for every seat.

Email ThisBlogThis!Share to TwitterShare to FacebookShare to Pinterest
Labels: do not want, restaurants