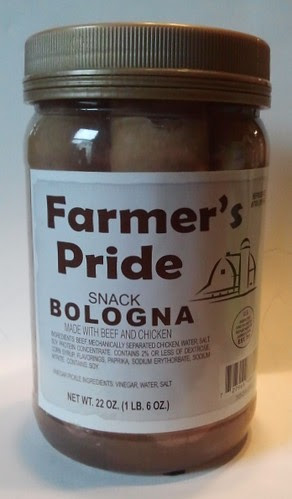 Late last week, I got a heads-up from Steve Wood, who writes Connecticut Museum Quest, a top-notch Connecticut blog that is about so much more than just museums. He alerted me to a new product at Ocean State Job Lot: Farmer's Pride Snack Bologna (which just so happened to be featured in OSJL's "internet coupon" selection.)

Holy shit, pickled bologna! How could I resist?

Lynnafred found the jars at our local Ocean State. She picked one up - it was the size of a largish peanut butter jar - and peered at the "bologna" within: they were in the form of huge, fat Vienna sausages (and according to the ingredient panel, they're composed of pretty much the same stuff.) The jars were plastic and sealed with soft plastic lids, and as Lynnafred looked through the brine at the bologna she said, "Eww. These are grey. Are they supposed to look like that?" After looking at a dozen other jars, and finding all of them containing somewhat greyish weiners sealed within, we concluded that the answer was probably Yes, they are supposed to look like that. The coupon said that there was a limit of 12 jars per family, but we curbed our enthusiasm and held ourselves to the purchase of a single jar which, at $1.20, seemed to be a fair price.

Let me start the actual review by saying that I can not believe that Farmer's Pride pickled bologna is a regularly-produced consumer good. Every single component of this product screams "DISPOSE OF CHEAP SHIT!!"  The jars are flimsy plastic, the lids seem to be made of the same quality plastic as imported dollar-store toys from China, the labels look like they were run off on a laser printer. Most of the jars at the store had sticky label residue clinging to the non-labeled areas, telling me that these snacks were probably rejected by the company which originally contracted them, leading the manufacturer to hastily peel the original label and rebrand them for the "remainder market" (i.e. dollar stores and job lot joints like OSJL.) And then, of course, there is the actual bologna itself:

That is one nasty-ass piece of tubesteak right there. Check out the gradations of coloring, from a kind of brownish-grey at the ends to rather pinkish in the middle. I swear I used no filtering or image manipulation to change those colors - that is exactly how they come out of the jar. Unfortunately, I wasn't able to capture the true beauty of the grey lines that run from tip to tip on the wieners, especially where the meat was in contact with the sides of the jar. These things are truly ghastly to look at. 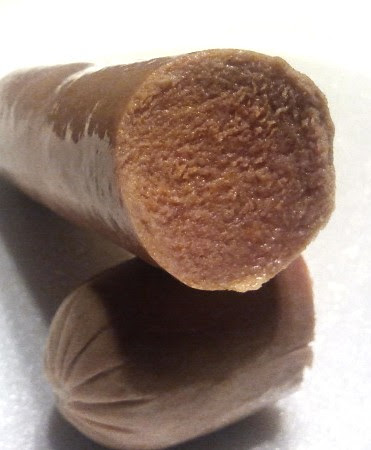 At least when we cut into the wiener we found that the grey color doesn't go all the way through - once you get a little way into the surface, everything kind of turns pink again. I guess that means that they're okay to eat. Honestly, eyeballs are all we have to go by for safety, because there are absolutely no olfactory cues here. No scent of spices, no aroma of meat - nothing at all except the pungency of strong vinegar stabbing at our nostrils like fleets of aromatic daggers. The manufacturer (Monogram Meat Snacks LLC, USDA EST 795) could not possibly have made the brine any more unpleasantly sharp.

And the wieners are just as unpleasant to eat as they are to look at. The texture is firm and smooth, but there is little flavor beyond the powerful vinegar brine, which is so acidic that it actually produces a burning sensation in the mouth and throat. And - worst of all to me - the meat leaves a disgusting tallowy film coating the mouth and tongue. These things are grossly misnamed - they should be called "Farmer's Shame." 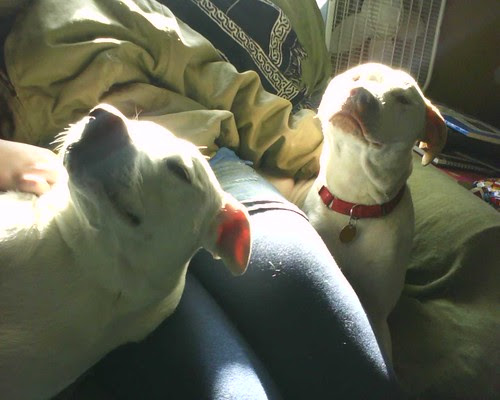 As with so many other oddball snacks we've tried over the years, Farmer's Pride Snack Bologna proved to be pretty popular with the dogs, though I didn't dare give them all they wanted due to the acidity of the pickle (the last thing I want to do is spend an afternoon scrubbing dog puke out of the dining room rug.)

So there you have it. Cheap, shitty, only marginally edible, and obviously close to the end of its shelf life - Look for 'em at a dollar store near you - and pass them up in favor of almost anything else you find.

Email ThisBlogThis!Share to TwitterShare to FacebookShare to Pinterest
Labels: disgusting, do not want, meat, pickles, snacks

I caved and tried some Fischer's brand Pickled Bologna (Kentucky company I think)a while back...

Not a repeat to be sure

I sampled Fischer's brand Pickled Bologna a while back....not a repeat buy for sure.even tried it with saltines and cheap beer