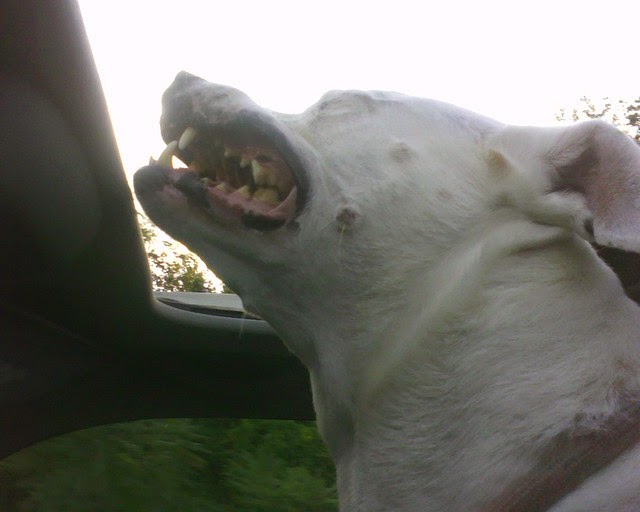 Have you ever given your dog those dried chicken strips for a treat? Dogs go crazy for those things. My dog Zim (seen here flapping his lips by hanging out the sunroof of the car) would do just about anything for a bit of dehydrated chicken.

There are two big problems with store-bought dried chicken treats, though: they're mad expensive and - far more importantly - lax production standards in China, where so many of the treats are made, result in products that can potentially kill your dog. I stopped buying imported animal treats several years ago when word first started circulating about the problem, and it hasn't gotten any better since.

Luckily, there is a huge supply of dog treats available to you at an extremely reasonable cost of time and treasure, and you need look no further than local supermarkets. 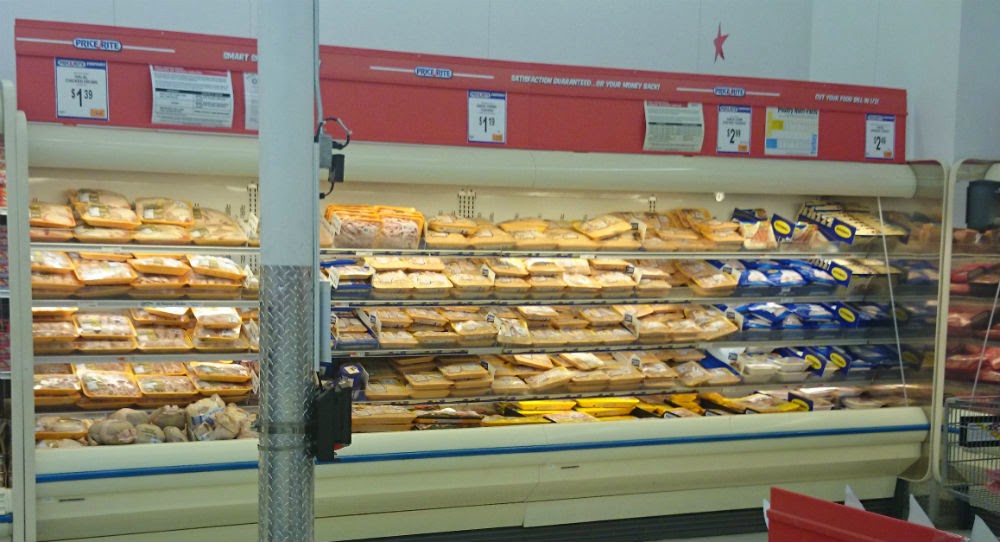 The answer is right there in the poultry section. The raw materials are inexpensive, dehydrate quickly with little risk of spoilage, have an insanely long shelf life at room temperature once they've been processed, and are not only low in fat but provide your dog with calcium. And they're crunchy as hell, which seems to be really important to dogs - if you've ever seen the way a teething puppy crackles an empty water bottle, you know how much dogs love stuff that crunches between their jaws.

I'm talking about chicken feet, or "chicken paws," as I've seen them hilariously packaged. They start out being low in moisture, consisting mostly of skin, tendons, and bone, so they dry well and keep a long time. While most everyone knows that you're not supposed to give dogs cooked chicken bones because of the danger that they'll splinter, that doesn't apply to raw bones, which help provide dogs with essential nutrients which their canine guts are especially keen at extracting. These treats aren't cooked, they're dried, so they're safe. And of course, they're not made in some anonymous Chinese industrial plant so you know exactly what your dog is eating.

The first step is to acquire a few pounds of chicken feet. Most of your suburban white-bread supermarkets will not carry them, so seek them out at more urban or ethnic locations. Asian markets are ideal, and usually the least expensive. When I make these (which is at least once every couple of months since I always give some away to friends with dogs) I try to get two heavy packages of them, five pounds or so. 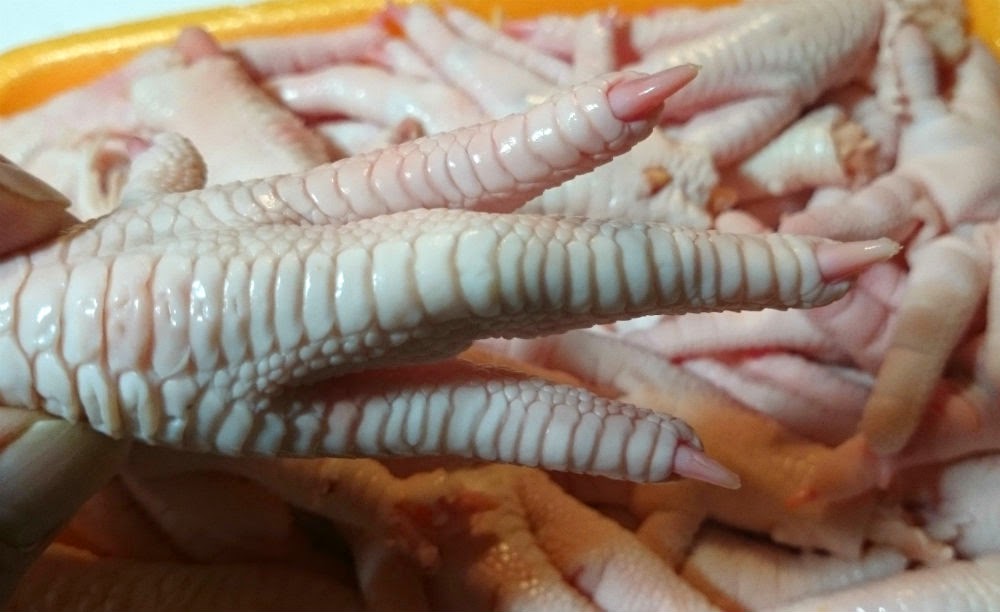 Chicken feet are rather cool and prehistoric-looking with big nails and scaly reptilian skin. And there's usually tendons sticking out of the cut ends. If you hold the chicken foot in one hand and pull on the tendons with the other, the toes will curl like some kind of gruesomely beckoning marionette. [My grandmother once told me that when she was a girl, she would take one of the feet of a freshly-killed chicken and do exactly that with it, chasing her squeamish and screaming older sister around the house with the monstrous gripping claw.]

Anyway,  once you get the packages home, open them up and give them a rinse. If you have a child around, show them how those tendons work - the kid will be fascinated and horrified and probably want to try it themselves, and you should let them as long as you have them wash their hands when they're done, because it's fun. 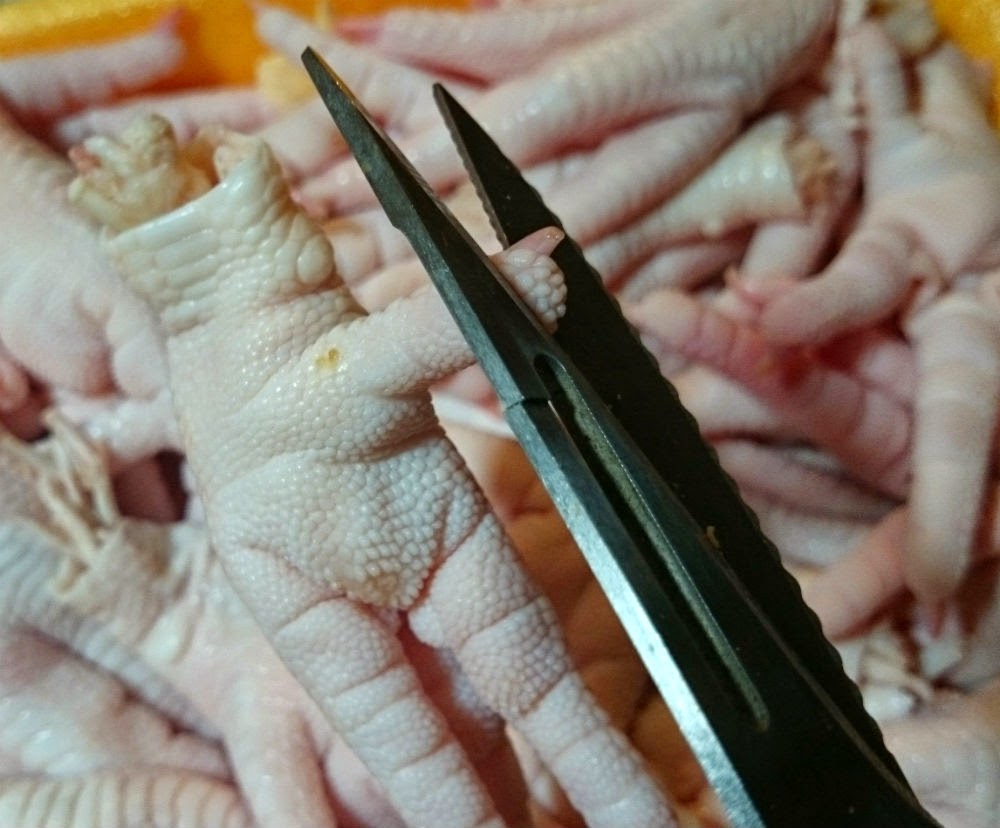 Okay, so that part about kids and tendons is optional, but rinsing shouldn't be. Rinse them off and then pat them dry. Then, using kitchen shears, cut off the toenails. If you cut straight through the toe at the base of the nail, you'll go right through a joint and it's easy. If you cut through bone, it's still easy, it just gives a bit more resistance. I take the nails off, even though I just told you a few paragraphs ago that raw chicken bones are okay, because they're sharp. Most of the nails are like needles, and they don't get any blunter when they're dehydrated. So just to be safe, I remove them. 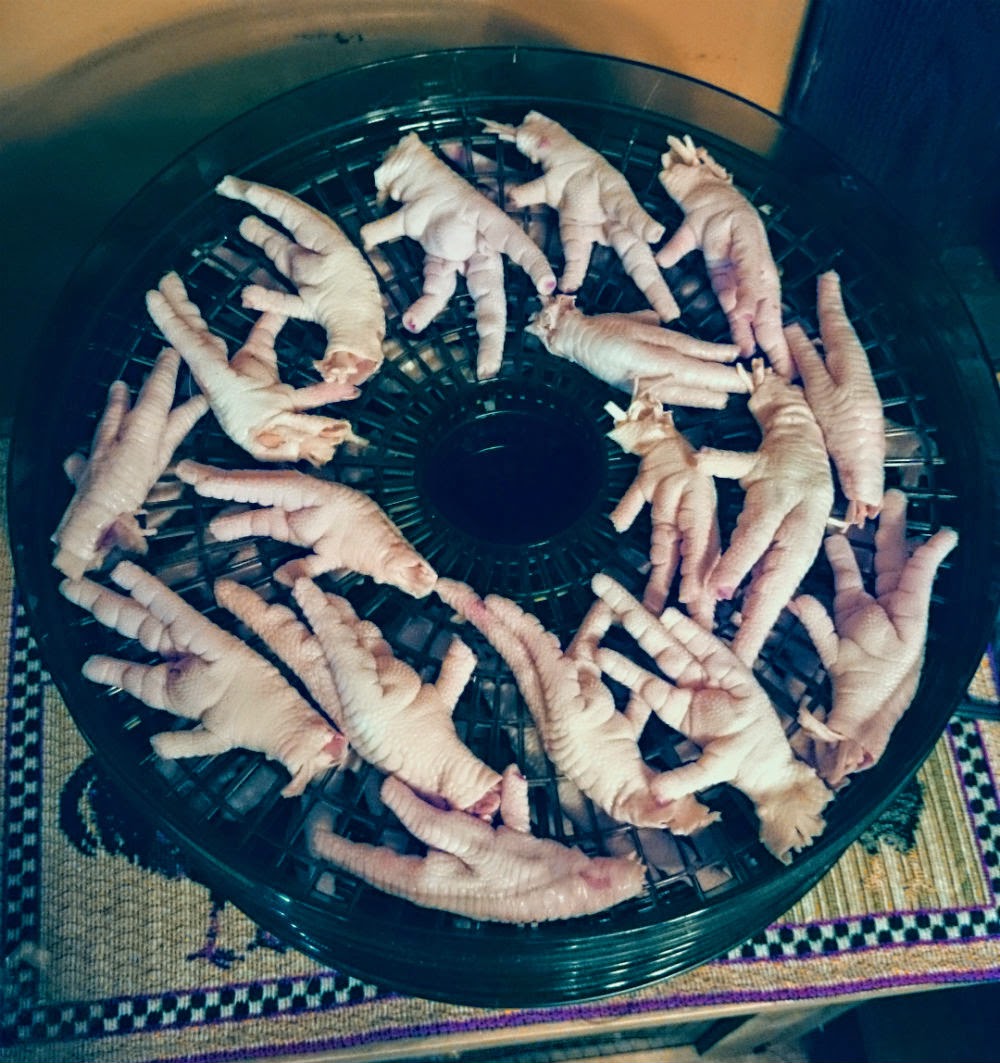 Next, I arrange them in single layers on the trays of my dehydrator. It's okay if they touch, but you don't want them packed tightly against each other because they need room for air to circulate around. Use as many dehydrator trays as you need, put the cover on, plug it in, and let it do its magic. I rotate the trays bottom to top once or twice a day. 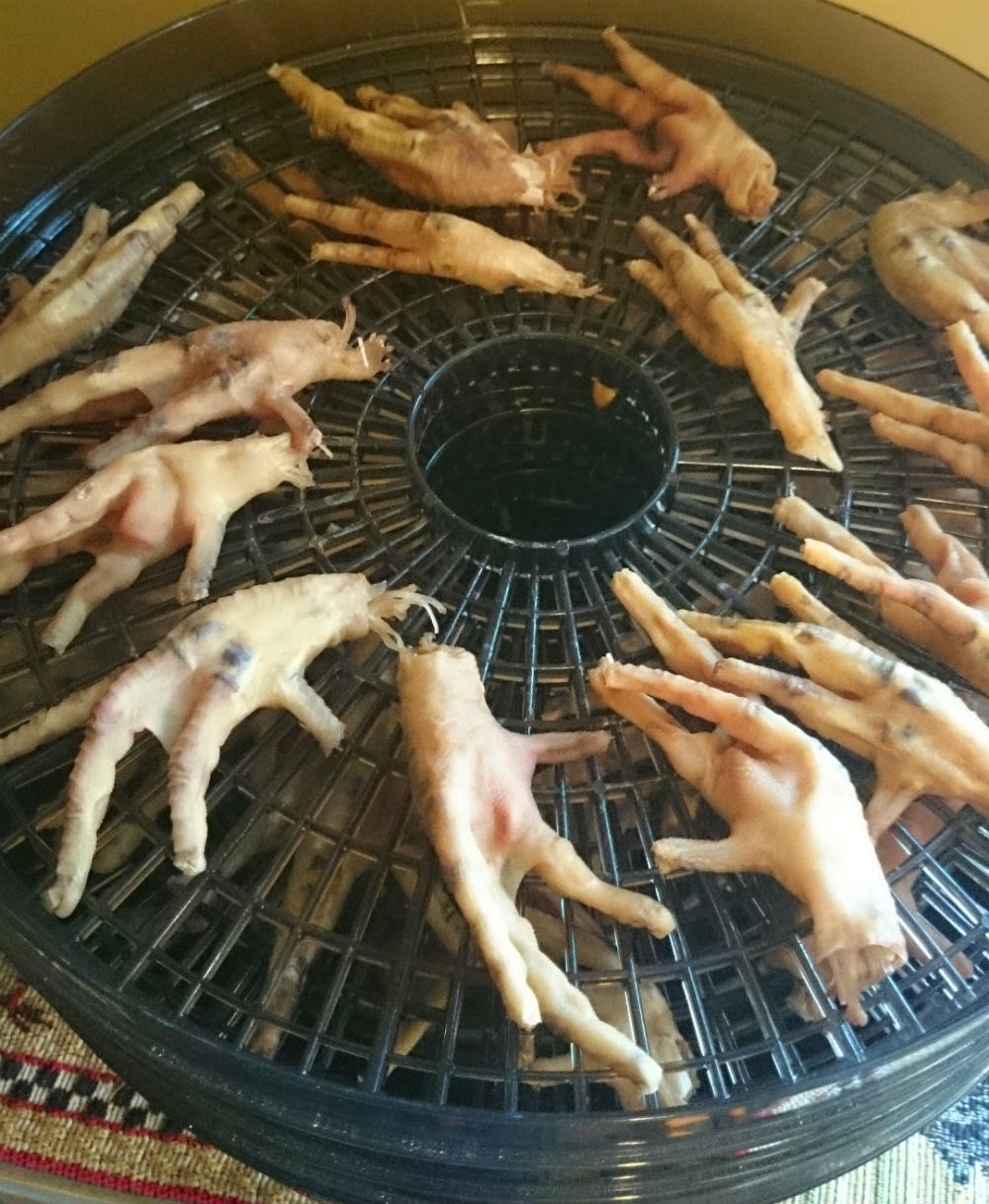 After three days, open up the dehydrator and check them out. They should be totally dry to the touch and rather stiff. If they feel at all pliable and leathery, they're not ready.

It usually takes three or four days for them to all dry out. You'll have a large enough supply for at least two months, feeding your dog one of these treats twice a day or so, and trust me he'll love them.

When you buy dehydrated chicken feet ready-to-eat online or at retail stores, they can cost as much as $45 a pound (they're often put up five or six to a package and that package costs up to 10 dollars!) I buy the feet for $1.29 a pound around here, so for six or seven dollars I make a bag full of them that would retail for about $75. 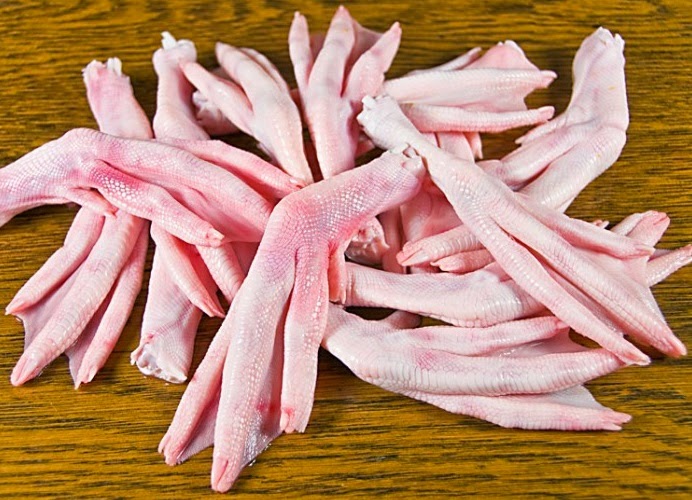 PS: If you're really lucky, you can find duck feet as well as chicken. They're a little meatier and more substantial than chicken feet, but you process them the same way. Usually they run about 20 - 25 cents a pound more expensive than chicken feet; you'll have to decide for yourself if that's worth it.


Where to find a dehydrator:

You can get one at many Walmarts or hardware stores, in the canning section. You can spend a couple hundred dollars on these things, believe it or not, but you can also order one inexpensively on Amazon. Or you can do what I did and pick one up at a church rummage sale or estate sale. Many people buy one, use it a couple of times, and then get rid of it. I've bought three or four of them secondhand like that, all the same make, and put the trays together to make one bigass dehydrator for making dog treats, jerky, dried herbs, and so on.

This was just what I was looking for! Is it okay to leave a larger shank on the legs, or should I cut them down to the ankles? I assume you use standard jerky temperature? Thanks!

When I buy the chicken feed or duck feet at the pet store they tell me there's smoked not dehydrated. Can you smoke them and still give them to your dogs since that's the way they do it in the pet stores

Kaya - I'm pretty sure that you can joint the chicken leg at the "knee" and use the foot from that knuckle down (like, cut it where the "drumstick" starts.) Yes, use the standard temperature you use or jerky. I also make chicken jerky for the dog using the dehydrator, because the local stores around here sell boneless/skinless chicken breasts or $1 a pound on sale! For those, I butterfly the breasts to make them thinner and put them in the dehydrator (again, at standard jerky temperatures) until they're dry and darkened. It's a huge savings over buying them at the pet store, with the added assurance that I KNOW they're not made in China.

Debi - Yes, you can smoke them. Just keep an eye on the temperature of the smoker so it doesn't get too high and watch so the feet don't get cooked to the point where the bones get brittle. Cooked chicken bones can harm your dog (raw/dehydrated ones are OK.)

I'm at the end of smoking my first batch of chicken feet. I'm excited because they look really good . The dogs are gonna be so happy.

Ive started doing this for my new puppy and the best thing is I work at a chicken kill plant so I can get breast for about 45¢ a pound d and paws for nothing!

Thank you for your detailed instructions.I was told that I couldn't dehydrate chicken feet. My fur baby Duchess will forever thank you 🐕🐶