There are four customer-submitted potato chip flavors being marketed right now by Frito-Lay. The winner via popular "voting" will be chosen to join the official Lay's Potato Chip flavor line. The official name of this contest is "Lay's Do Us A Flavor Choose Your Chip Contest," but "Flavor Deathmatch" sounds a lot more exciting.

Anyway, we've tried all four flavors and here's what we think of them: 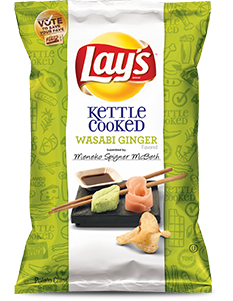 Kettle Cooked Wasabi Ginger - this one was the hardest of the four for me to find...either it's so popular that stores can't keep it on the shelves, or so few people want them that supermarkets won't reorder them. Based on the flavor, I really can't decide.

I expected a strong horseradish/mustard/ginger kick from these chips, but they're a lot more gentle than I thought they'd be. I didn't get a lot of ginger flavor (a note or two in the background) and the horseradish was limited to only a hint of the true power of The Root, with the strongest flavor element being vinegar. I think these will really appeal to people who like salt-and-vinegar flavored chips...as long as they don't mind a [small] bit of horseradish kick. The kettle cooking  is a plus; the hearty crunch is a great accompaniment. 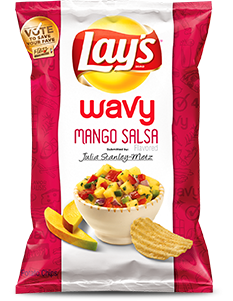 Wavy Mango Salsa - Fruity and slightly spicy, Lay's has come up with a rather odd interpretation of mango salsa for these chips. "Mango" is way down the list of ingredients in the "Mango Salsa Seasonings" on the label list (third from last!) and it comes through as kind of a vague fermenty citrus flavor, almost like overripe pineapple than mango.  Red bell peppers, onion powder, and paprika round out the salsa taste. I can't imagine this flavor winning the challenge. On it's own, it's kind of disgusting. But it's a wavy chip, and that means it's made for dipping! Maybe Lay's intends this flavor to get obliterated by heavily-seasoned dips. Oh well. I'll never know, because I'll never care. 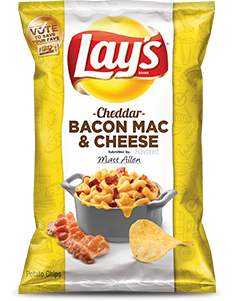 Cheddar Bacon Mac & Cheese - A flavor bulls-eye, and why wouldn't it be? Powdered cheese flavoring has been turning fingers orange for at least 50 years, it would be almost impossible for them to screw it up. Now, most "bacon" flavored stuff is pure garbage, relying on smoke and salt to try to fool your taste buds into thinking it doesn't suck. And I'm sure that one of the components of the "Natural Bacon Type Flavor" listed on the label is smoke, because once you notice it, it becomes almost the only thing you can taste. But there is a "meaty" quality to the chip flavor that powdered chemicals alone can not explain. Oh, wait, maybe it's the bacon fat!  Yes, Frito-Lay doses the formula with real bacon fat for that authentic pigmeat experience. In the end, though, it probably doesn't matter: long before the end of the bag, I had eaten a lifetime's supply and the chips were tasting more like Cheetos rubbed around an ashtray than Bacon Mac & Cheese.  Sadly, this flavor will probably be the winner, because there are countless people who have been mesmerized by the Internet Bacon Meme 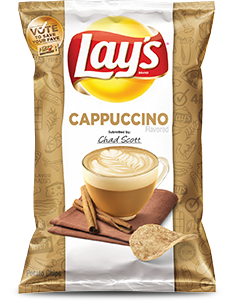 Cappuccino - Right off the bat, I was impressed by the Cappuccino variety. If you like coffee, your mouth is going to water as soon as you open the bag, because a sweet and gentle coffee aroma will wrap your face in a comfy caffeinated quilt that beckons your taste buds.

And they only get better from there. Cappuccino chips have a lot of complex things going on in their flavor profile. Coffee, cream, cinnamon, and a buttery richness that made me check the ingredients panel (sure enough, butter is on the list.) While the taste can't ever be said to be truly "cappuccino," they have the same kind of umami appeal that salty caramel has - I swear, the human mouth is hard-wired to instantly love anything that is simultaneously salty and sweet.

I liked them best of the four, but I have to qualify that by saying that these aren't the kind of chips you pile up on a plate to keep your burger company. They're a true snacking chip, meant to be eaten all by themselves (or maybe with a simple, unadorned sour cream dip) later in the evening while you're stretched out in your recliner watching Law & Order.